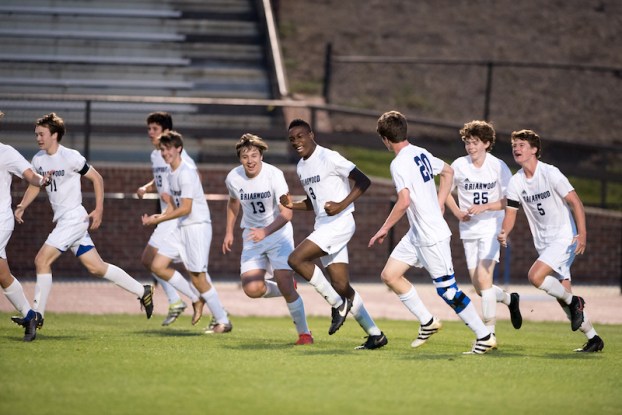 Briarwood picked up a 10-0 win over Demopolis in the first round of the playoffs after scoring five goals in the first half and five more in the second half. (Reporter photo/Keith McCoy)

Lions top Demopolis with mercy rule in 1st round of playoffs

NORTH SHELBY – It was an exciting night for the Briarwood Lions soccer team on Saturday, April 29, as they took to the field in the first round of the playoffs after seeing the girls come away with a 10-0 mercy-rule win in the first half over Demopolis. This had to give the Lions’ boys team some confidence going into their game as they were also taking on the Tigers.

The home team put on a scoring clinic for the fans in attendance at Lions Pride Stadium scoring five goals in the first half and adding five more in the second to assert themselves as the kings of the jungle and give both Briarwood squads a mercy-rule sweep.

“Tonight we were able to rotate some guys around. We actually rested two starters and gave guys some good minutes off the bench,” Briarwood head coach Shawn Brower said.

When the Lions’ starting players took a breather, it made no difference.  Their depth off the bench provided the same kind of offensive and defensive production as their entire roster was able to contribute to the rather easy first-round win.

The number of shot attempts that Demopolis had in this game could be counted on one finger – and only one of them made it on goal. Sam Candler and Bryant Wood were two defenders that maintained Briarwood’s ball possession and shut down any potential threat from the Tigers. Logan Frost was all over the field as well.  Many times he predicted where Demopolis players would pass the ball, stepping in front to intercept it and quickly went on the counter attack.

Incredibly, Housel is the lone senior on Briarwood’s roster as this deep team is comprised of seven freshmen, six sophomores and six juniors.  Brower said it’s a group that has good chemistry and camaraderie.

“Most of these players are young, but you certainly want to take advantage of the year that you are in,” he explained. “I try to get them to enjoy the moment because we are competing now but also building for the future.”

Round 2 features a competitive matchup between the home team, Briarwood, and Trinity Presbyterian, from Montgomery.  The game is set for 7 p.m. at Lions Pride Stadium.

No. 1 Pelham advances to round 2 of soccer playoffs