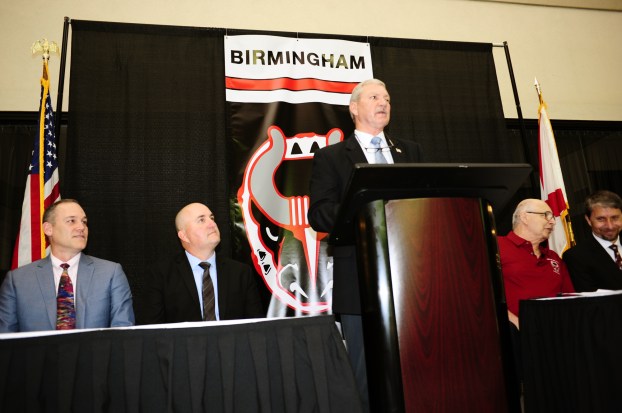 Pelham Mayor Gary Waters speaks at the press conference to announce the return of the Birmingham Bulls, who will play all home games at the Pelham Civic Complex. (Reporter photo/Briana Harris)

Every few years the talk of a professional sports team coming to the Birmingham-metro becomes a hot topic, but despite all of the chatter among residents and the wishful thinking, nothing ever actually comes to fruition as this thriving area still awaits the day a professional team establishes a local home base.

With the revival of the Birmingham Bulls organization in the suburb of Pelham, talk has spurred again of a major professional sports team calling the Birmingham-metro area home.

The Birmingham Hockey Club LLC, who owns the Bulls organization, is hitting the ground running. Pelham Civic Complex is going to undergo a renovation to add about 2,000 more seats, meeting rooms and even some box seating as they hope to make it as fan-friendly as possible when the season rolls around in late October.

With buzz galore of the Bulls returning to the Birmingham area, support is clearly going to be high and this is the chance to show any professional organization in all sports that the city can sell out games and will support a professional team.

Birmingham has squandered away at the many chances it has had over the last 65 years to bring a professional sports team as city officials find every excuse in the book to keep from building the necessary facilities to attract any professional team to even remotely consider the idea.

Flashback to 1950 when Birmingham and Atlanta were very close in population size. During that decade, the Birmingham population was 326,037 compared to 331,314 in Atlanta. Move forward two decades to the 1970 census and you’ll find that Atlanta added more than 100,000 new citizens skyrocketing its population to 495,039 compared to Birmingham who lost close to 26,000 people as its population plummeted 300,910 people.

So what is that changed?

Well there’s a lot of answers for that, but one major component of the equation was the lack of fear to build. Ever heard the old saying “If you build it they will come?” Well, it paid off for the city of Atlanta.

The city built the Atlanta-Fulton County Stadium hoping to attract a sports team, and sure enough they came.

First, in 1965, once the stadium was complete the city decided to pursue the chance of attracting a professional football team to Atlanta and on June 7, 1965, the city was awarded the Atlanta Falcons. A year later, the Milwaukee Braves followed suit and moved to Atlanta as well, and two years after that, the Hawks came to town to give the city teams from three of the most popular American sports.

Since then, Atlanta has almost doubled Birmingham in the 2010 census with a population of 420,003 compared to 212,237. While that’s not all due to the sports franchises, it is a major reason the city of Atlanta is what it is today.

So the time for the Birmingham area to do what it should have 60 years ago is now. It starts by building a venue to attract a team, whether it be near the uptown district in downtown Birmingham where everything seems to be popping or in one of the city’s largest suburbs like Hoover or Pelham, it’s time for somebody to take charge and be fearless.

At the very least it will lead to a bigger bowl game in football, the NCAA tournament in basketball, more concerts and bigger shows, meaning the city that steps forward will thrive and grow.

There is no doubt in my mind any city in the northern part of Shelby County, such as Hoover, Alabaster, Pelham or Chelsea could be the host for one of the teams, and no doubt that this city and its surrounding suburbs would attend an NBA, NFL or NHL game on a game-by-game basis. The chance to prove that and show people that we are serious comes next October when the Bulls take the ice for 28 home games in the Pelham Civic Complex.

Previewing round 3 of the baseball playoffs

By ALEC ETHEREDGE | Sports Editor A 5-1 record in week one of the 2017 postseason was a strong start... read more