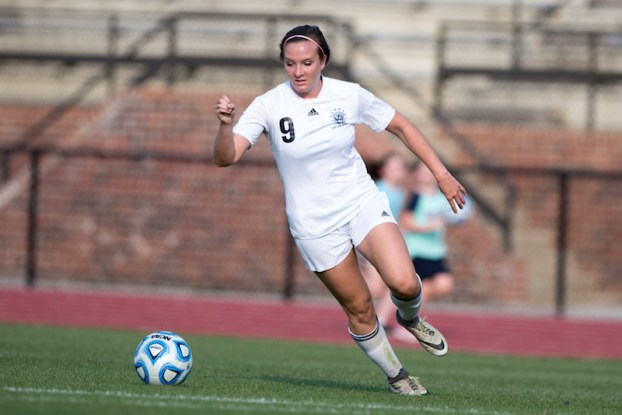 The Briarwood girls soccer team picked up an easy 10-0 mercy-rule win over Demopolis in the first half on Saturday, April 29, to start the 2017 postseason. (Reporter photo/Keith McCoy)

NORTH SHELBY – The Briarwood girls’ soccer team wasted no time on Saturday afternoon, April 29, as they opened the 2017 5A girls soccer playoffs by racking up 10 goals in the first half to trounce Demopolis and advance to the second round.

Prior to Saturday, Briarwood had posted a record of 8-5-3, while Demopolis was 2-7. This result came as no surprise, with the Lady Lions being viewed as a strong contender to win the 5A state championship, especially with an easily manageable bracket in front of them.

Although they were expected to win Saturday’s game, they still had to take care of business against the Tigers as anything is possible in the playoffs. They made their superiority known early on with strong execution as they came out of the gates scoring two goals in the first three minutes.

Then, the Lady Lions would go on to average one goal every four minutes, making it look almost effortless at times.

Maggie and Sarah Adcock got things started for the Lady Lions, but they didn’t do it alone as Audrey Halpin, Sydney Grace Edge, Blaire Shimer and Ellie Sherrod also found the back of the net.

Most goals came off of accurate crosses from the sides, with firm finishes in front of the net by a Briarwood player. It was excellent passing, like Lions head coach Ryan Leib had prepared his team for all season.

“I was most impressed with our ball movement today,” Leib said. “You can dribble through five players, but that’s not how real soccer is supposed to work. Good things happened and real scoring chances occurred when we moved the ball well.”

When players are having success, it makes sense to do the same thing again and again. Demopolis had no answer and made no adjustments. They were completely overmatched.

Perhaps the most interesting play came on the final goal. Just before the halftime whistle blew, Briarwood drew a foul in the box. On the ensuing penalty kick, junior Caroline Duffee blasted it past the Demopolis goalkeeper. The best part was that Duffee actually started the contest as Briarwood’s goalkeeper. She had been moved to a striker position because of the early lopsided count. It turns out that Duffee can score goals, as well as prevent them as she picked up the mercy-rule goal in the 10-0 win.

Briarwood will host Trinity Presbyterian in the second round on Tuesday, May 2, at 5 p.m. Leib said his team has not faced Trinity since 2015, but he expects it to be a close and competitive contest.

Lions top Demopolis with mercy rule in 1st round of playoffs

By CHRIS GRIESEDIECK | Special to the Reporter NORTH SHELBY – It was an exciting night for the Briarwood Lions... read more