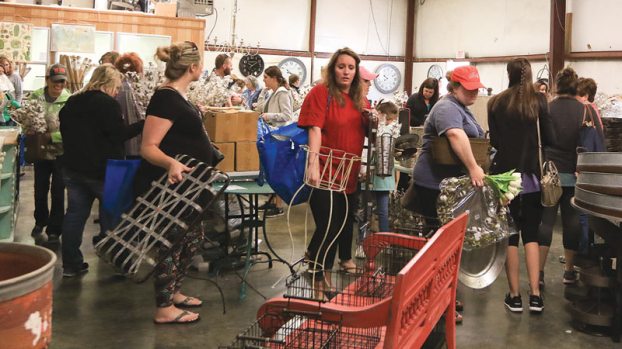 Customers carry items they intend to purchase to the checkout lines at the Farmhouse + Family warehouse in Alabaster.

The date is March 4. The time is 9:25 a.m. The gravel lot in front of a nondescript metal warehouse in Alabaster is full of parked cars.

And a long line of people waiting to go inside the building is growing by the minute.

One woman in line tells the person next to her she feels like she is waiting to get into a rock concert.

Saturday morning sales at Farmhouse + Family are anything but boring, and they are quickly gaining more attention––and new customers.

Jason and Alicia Seales, the couple that started Farmhouse + Family, never imagined their wholesale home décor and furniture business would take off at such a rapid rate when they launched it in May 2016.

Farmhouse + Family was an unplanned addition to their already-busy family.

“It started with big iron and wood windows,” Jason said.

Jason’s father, who has been in the wholesale business for 36 years in Alabaster, saw the decorative windows somewhere and told Jason about them, thinking they would sell well.

Jason and Alicia bought six windows, and Alicia kept one for their home. Jason’s father put the other five in his warehouse, but they didn’t sell.

Then, Jason suggested that Alicia share pictures of the windows on a local online trading site.

By that night, the couple had sold 30 windows. More requests for the windows quickly followed.

As Jason and Alicia sold more windows, meeting customers to deliver the windows they purchased became a hassle.

That’s when the couple decided to hold a sales event open to the public in Jason’s grandfather’s old auto shop in Pelham.

Although their overhead costs were low, they worried about receiving enough customers to justify the sale.

They were excited to see their first few customers arrive.

Customer turnout was good, so Jason and Alicia continued holding the Saturday sales.

They started sharing the sale dates and times in advance on the Farmhouse + Family Facebook page, which, except for word of mouth, has been the only form of advertisement the couple has used––or needed––for the business.

What started out as a low-key sales venture has morphed into a booming business, seemingly overnight.

Their concern shifted from drawing in enough customers to stocking enough inventory to meet customer demand.

“It was almost like one sale, everything changed,” Jason said. “What happened was I paid for a Facebook promotion. All of a sudden, it went crazy in a week.”

They began to worry whether they could accommodate the droves of people flocking to the sales, sometimes an hour or more before they opened.

“We knew we had to move into a bigger building,” Alicia said.

The couple decided to move the sales to the current location, a building off Simmsville Road in Alabaster that Jason’s father used as an auction building years ago.

The move gave them more space for inventory and parking.

The first sale in the new location was a Black Friday sale last November, Alicia said.

“We have steadily grown in inventory and space and customers,” Jason said. “We try to pay attention to what sells good. Our wholesale business model from the beginning has been we want to offer the best quality item we can at a price point that is near wholesale. We try to make up (for it) in quantity of stuff sold.”

The business itself preceded the couple’s branding it as Farmhouse + Family, a name Jason created based on the main themes of the business.

The rustic-chic style of the inventory has been likened to furnishings and décor popularized on HGTV’s hit TV show “Fixer Upper.”

Although the couple tries to keep bestselling items like cotton stems and olive buckets stocked for every sale, no items are guaranteed to be restocked.

They strive to offer a selection of new items each time they open their doors for a sale, a goal that is difficult, but necessary, Jason said.

“It’s a constant search,” he said. Jason traveled to Mexico in March to source new iron and wood windows. “To keep people coming, you have to have new items at every sale. We find inventory all over the world.”

The sales are held on Saturday mornings from 9 a.m. to noon or 1 p.m., usually every three to four weeks, depending on the couple’s schedule and inventory.

As the sales events expanded, Jason and Alicia had to consider how they could provide the best customer experience. They started limiting the number of people allowed inside the building at one time, hiring helpers specifically for sale days and adding bar codes to all items to streamline checkout.

Helpers serve as parking attendants, load larger items into customers’ vehicles and control the flow of customers walking into and out of the building, allowing Jason and Alicia to focus their time and attention on moving customers through checkout lines as quickly as possible.

“We’ve just quickly been trying to keep up with the growth,” Jason said. “We didn’t expect it to become this big, not in a million years. We weren’t really looking for it to be; it was just something to help our family.”

Their son, Eli, has even started helping them on sale days, and daughter Anna helps move boxes and put price labels on items before sales.

“He likes helping give change back at the cash register,” Alicia said of Eli.

The couple strives to keep their prices as low as they can to fit into a family’s budget.

“You want to give people a good price on stuff,” Jason said. “That’s our whole strategy – the lowest price we can sell it for.”

Jason said one of the most exciting things about opening Farmhouse + Family has been meeting and building relationships with people in the community.

“That’s been really cool,” he said.

The business has also allowed Jason and Alicia to give more money to their church for ministry and outreach.

“It’s enabled us to give a lot more to missions,” Jason said. “It has taken some financial stress off the church.”

Another reason Farmhouse + Family works so well is because Jason and Alicia work so well as a team.

Alicia has a business management degree from the University of Montevallo, and entrepreneurship is “in Jason’s blood,” he said, adding, “It’s fun for us to have something we can do together.”

They work hard to operate Farmhouse + Family, but they are quick to emphasize it comes below church and family on their list of priorities.

The couple averages 220-250 transactions per sale.

“Pretty much every sale has grown every time,” Jason said, noting about 15 percent of people at each sale are return customers.

Although they weren’t expecting the business to take off the way it did, Alicia said God’s timing with everything was perfect.

“It’s certainly the grace of God,” Jason said. “It’s not anything we could have ever dreamed of. We don’t know how long it will last, but we’ll go as long as we can.”

Farmhouse + Family sales are held at 1165 Simmsville Road in Alabaster.