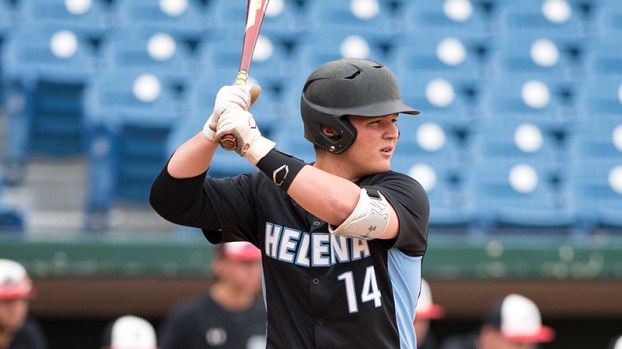 Helena’s Sam Praytor went 2-for-2 at the plate including a solo home run in a 3-0 win against Opelika on Friday, April 28. (File)

Helena sweeps Opelika in second round of playoffs

OPELIKA–The Helena Huskies boys baseball team moved one step closer to their goal of getting to the state championship after traveling roughly two hours to take on Opelika on Friday, April 28, and defeated the Bulldogs by scores of 3-0 and 3-1 in the second round of the AHSAA 6A baseball playoffs.

This was Helena’s first playoff series played away from home and their first road game since an April 17 tilt with Spain Park in the final game of the regular season.

The Huskies once again used solid pitching to sweep the series at Opelika.

Helena starting pitcher Riley Davis has become an anchor in the starting rotation for the Huskies and in game one, Davis tossed his second complete game of the postseason as Helena defeated Opelika 3-0.

Davis pitched seven innings and struck out seven Bulldog batters on 84 pitches in the dominating performance.

Offensively, Helena had just enough to pull away for the win as they finished with five hits as a team. The Huskies put up one run apiece in the fourth, fifth and sixth innings to give Davis some insurance runs.

Helena’s Sam Praytor went 2-for-2 at the plate including a solo home run in the top of the fourth inning to lead the Huskies.

Coming into game two, Helena wanted nothing more than to try and get a win in the nightcap on Friday night to avoid playing a third game in the series on Saturday.

The Huskies did just that, defeating Opelika 3-1 to sweep the best-of-three series thanks to more solid pitching and two big hits in the bottom of the fifth inning.

Helena starting pitcher Troy Cordrey gave the Huskies six quality innings of work as he allowed just one run on five hits and struck out five.

With two outs and a runner on second in the bottom of the fifth inning, Helena’s Jake Busby hit a clutch RBI double to score Lawson Peoples to break the 1-1 tie.

Up 2-1, the next batter was Davis who roped a triple to right field to score Busby to give the Huskies a 3-1 advantage.

Landon Green entered the game in the top of the seventh inning and recorded the save as he struck out two and forced a fielder’s choice to preserve the 3-1 win.

With the win, Helena advances to the third round of the AHSAA 6A playoffs and will face Baldwin County at home. Games one and two will be Friday, May 5, at 5 p.m. and 7:30 p.m. If necessary, game three will be at 1 p.m. on Saturday, May 6.

By GRAHAM BROOKS / Staff Writer HELENA–Parents with children in grades one through six who live in Helena and wish... read more