You might have expected a classic car buff like Steve Gilbert to wonder why mid-20th Century Montevallo seemed to drive only Fords.

That anomaly played a role in Gilbert’s developing into the city’s bicentennial sleuth. 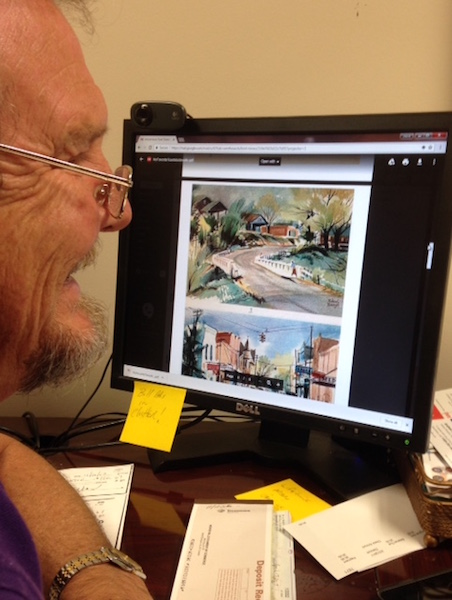 In his Montevallo Chamber of Commerce office hang two vertical matted and framed sets of three prints each of watercolor paintings. Something about the six 3-by-5-inch depictions drew Gilbert’s attention several times, and he idly wondered about this inherited office decor.

“I remember thinking that the pictures looked a lot like Montevallo,” he said. There was a reason for that.

About a year ago, Gilbert, chamber executive director, was cleaning out a storage room at the chamber. He found a small framed identification card that provided clues to what he was beginning to decide was a mystery.

For Gilbert that explained why every car depicted in the paintings’ street scenes was a Ford. The card now hangs with the prints in Gilbert’s office.

However, in the way that the answer to a question sometimes begets more questions, Gilbert began to wonder about Hamilton and Brough, especially Brough. A few months later, when the bicentennial bandwagon began to roll, Gilbert mentioned the paintings during a committee meeting. Chairwoman Pam Phagan and others expressed interest in using the paintings in the bicentennial celebration.

“Google” is a great way to visit the past, Gilbert said, and he learned about the Ford Times magazine and found that Ford Times, a publication put out by Ford Motor Co., kept publishing into the 1970s. He found copies of the magazine for sale on eBay, but, alas, Gilbert didn’t find a copy of the February 1953 issue.

Even better than Google was University of Montevallo Archivist Carey Heatherly. When Gilbert mentioned the paintings to Heatherly, the archivist provided a digitalized copy of the sought-after issue from UM’s collection. And then Gilbert discovered that retired teacher Emily Pendleton had a copy.  She remembered, as a teen, watching the artist sit in her front yard to paint.

Gilbert discovered that Brough was a long-time art professor and well-respected world-traveling water-colorist from the University of Alabama. A call to a contact at the Tuscaloosa Arts Council added more information, and before long, Gilbert was corresponding via email with Brough’s daughter, Carol Ann Brough.

Since then, the Montevallo Bicentennial Committee has swung into action. With the OK of Brough’s children and the magic of Iris Tish at the Type Shop in Montevallo, packages of note cards with each of the six paintings are now available for $15 a packet, proceeds going to the bicentennial celebration.

But, the committee is still mystified about Virginia Hamilton, whose story from the Ford Times tells of voluntarily giving up the excitement of journalism in Washington, D.C., to move to “a small college and the town of Montevallo, Alabama.”

Pedal through 200 years of Montevallo on April 29

By NANCY WILSTACH / Community Columnist Bicyclists can pedal into the pages of history, as they get firsthand stories about... read more