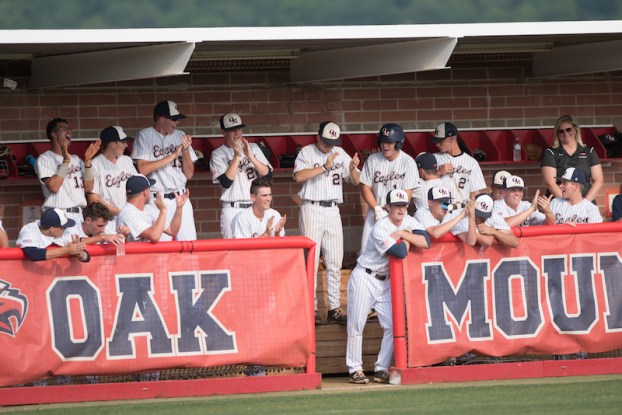 Oak Mountain will be one of four county baseball teams looking to advance in the 2017 playoffs this week. (Reporter photo/Keith McCoy)

Previewing round 3 of the baseball playoffs

A 5-1 record in week one of the 2017 postseason was a strong start for Shelby County baseball teams as they looked to make a run at a state championship after a strong regular season of play, but a more average week two ended the season for four teams vying for a coveted blue map.

Briarwood, Calera, Spain Park and Vincent, who spent most of the season as favorites and top 10 teams in their respective classifications, all fell in round two action over the weekend of April 28.

Still though, Oak Mountain, Chelsea, Helena and Kingwood all remain alive and are one step closer to a state championship as they only need a couple of more wins to finish off a memorable run.

Oak Mountain: The Oak Mountain Eagles followed their strong regular season with a sweep of Huntsville in the first round of the 7A playoffs by scores of 6-4 and 6-2. The Eagles trailed in both games, but buckled down late and were able to pull off two thrilling games. Oak Mountain has now won 11 straight games and 20 of its last 22.

They’ll travel to Vestavia Hills on Friday, May 5, for a quarterfinal matchup with game one scheduled for 4:30 p.m. and game two at 7 p.m. An if necessary would be Saturday at 1 p.m. The Rebels are coming off an upset of Sparkman in round one after taking the Senators to three games. They lost 6-7 in the opener before winning 9-5 and 7-6 to close out the series in exciting fashion.

My prediction: Vestavia won a 7-6 contest in the only regular season game between the two as they took down Eagles ace Joseph Hartsfield in a nine-inning extravaganza. Last week Hartsfield along with Gene Hurst looked a little timid, but now that they’ve shaken off the game one rust, I think those two guys will be too much for the Rebels offense as Oak Mountain takes the sweep and advances. If it does go three games the Eagles may fall.

Helena: After an opening round sweep of Russell County at home, the Huskies didn’t miss a beat on the road in round two picking up a sweep over Opelika with wins of 3-0 and 3-1. This Huskies squad is dominating on the mound right now having given up just two runs through their two series sweeps outscoring Russell and Opelika 17-2.

This week Helena is back home and will host Baldwin County with a trip to the semifinals on the line. Game one is scheduled for Friday at 5 p.m. and game two will follow at 7:30 p.m. An if necessary would be the following day at 1 p.m.

My prediction: After losing to Spain Park to close out the regular season, Helena has won four straight in the postseason and 23 of its last 25 games. Baldwin County is a good team, but the Huskies aces have given up more than three runs just three times this season and will be too much for Baldwin in this series as Helena pulls off a third consecutive sweep.

Chelsea: The clutch gene is in full force in Hornet country right now. In week one, Chelsea was forced to win with a walk off to get by Northview and after dropping its first game to Benjamin Russell in this past weekend’s series, they were forced to win two straight games to advance, which they did.

Chelsea now advances to the quarterfinals where they will host a very good Hillcrest-Tuscaloosa team this Friday in a doubleheader. For the second consecutive week they’ll be at home with game one scheduled for 5 p.m. and game two for 7:30 p.m. An if necessary would be Saturday at 1 p.m.

My prediction: The Hornets believe they can beat anybody right now, which makes them extremely dangerous. They have looked good defensively and on the mound all year, and while that trend has continued, their offense has also started to click. This week, however, Chelsea runs into a Hillcrest team that has scored 13-plus runs in three of its four games this postseason. The Patriots have outscored their two opponents by a combined 52-7, including an impressive Spanish Fort team. I hate to say this, but while the Hornets seem to have destiny on their side, this is the week they will fall due to luck of the draw. There’s no doubt, however, they want a second look at Helena in the semifinals.

Kingwood: While the AHSAA schools are in the quarterfinal round, the AISA will be in the semifinals as trips to the state championship will be on the line. Kingwood is one of those teams, and after taking down South Choctaw in the quarterfinals with wins of 2-1 and 5-4, both of which came in the final inning, the Lions will carry a lot of momentum into their series with Clarke Prep.

The two teams will kick their series off on Wednesday, May 3, at Clarke Prep with a doubleheader. Game one is scheduled for 4 p.m. and game two for 6 p.m. An if necessary would be Thursday at 3:30 p.m.

My prediction: These two teams are very even on paper as both picked up sweeps in the first round and both have nine losses on the season. Kingwood has been known for a powerful offense all season, but it squandered away from them in the quarterfinals scoring just seven combined runs. Their pitching had to carry them and keep them in the two games, which is concerning. Clarke Prep has the home field advantage causing Kingwood to have to travel two-and-a-half hours south and for that reason I will go with Clarke to come out on top in a tough three-game series.

Helena sweeps Opelika in second round of playoffs