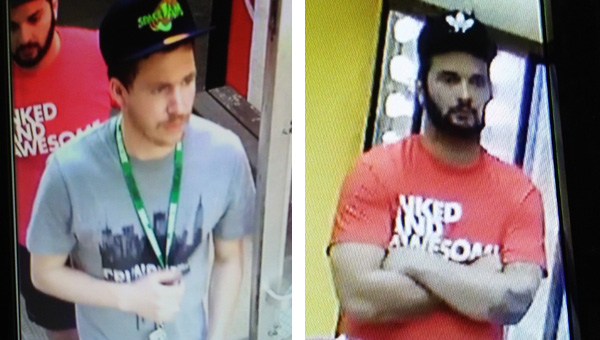 Authorities believe these two men, captured in surveillance footage at Whit’s Groceries in Sterrett, returned to the store after business hours on April 26 and stole cash, cigarettes and other items. (CONTRIBUTED)

STERRETT – A $500 reward is being offered for information about a recent burglary from Whit’s Groceries off Alabama 25 in Sterrett.

Store owner Caroline Dunsmore said two perpetrators broke into the store around 2 a.m. and 4 a.m. on April 26 and stole cash, cigarettes, knives and a laptop computer.

The total loss to the store, including damage, was about $10,000, Dunsmore said.

“Part of that money was my money, not just the store’s money,” Dunsmore said.

“It never triggered the alarm because the alarm is set for door separation not shattered glass,” she said.

Dunsmore has posted images of the suspects on social media, along with the reward, in hopes someone knows something about the incident, but information has been hard to come by.

“Nobody recognizes them,” she said.

Investigator Adam Mitchell with the Shelby County Sheriff’s Office said the suspects are likely from out of state.

“The question is what brings them to our state,” Mitchell said. “We’re working on it; it’s just a matter of finding them.”

Mitchell said it has not been determined that the pair were connected to any other crimes.

Anyone with information about the crime or the suspects should contact Mitchell at 670-6045 or amitchell@shelbyso.com.

COLUMBIANA- A Jemison man was arrested and charged with trafficking methamphetamines on Friday, April 28, after he allegedly attempted to... read more