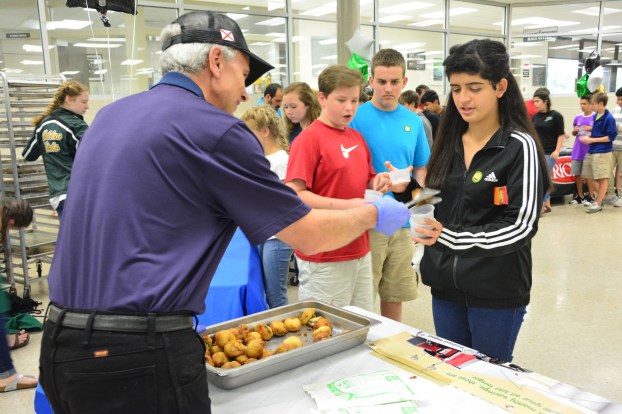 Taste of RMS a hit with students

Child Nutrition Program Manager Shannon Lombard said the event serves as a way for students to be introduced to new foods. Lombard said some the items featured at the event make it to the school’s lunch menu for the next school year.

“There are surveys at the booths and the teachers take the surveys back to their class so the kids can fill them out,” Lombard said. “That gives us a way to find out which foods did well and which ones didn’t.”

Lombard said a total of 731 sixth through eighth graders made their way to the lunchroom to sample the food.

“We work on this event almost all year, and the kids love it,” Lombard said.

Lombard said all of the food at the event had to meet the state’s nutrition guidelines.

“School lunch is changing,” Lombard said. “It’s not how it was what I was growing up. We’re finding new ways to introduce new and healthier foods to the kids.”

Students also had an opportunity to play trivia games and win prizes.

Eighth graders Cami Weaver and Krista Gogan said they enjoy the event because they love food and it’s an opportunity to get out of class.

“It gets you excited about the next year and what types of new foods to expect,” Gogan said. “One of my favorites was the spinach artichoke dip.”

“Yeah, and the popsicles and Popchips,” Weaver added.

This school year, Gogan said her favorite items that were added to the school’s lunch menu was chicken salad and smoothies.

“The food is definitely improving every year,” Weaver said.

Students in the school’s Family, Career and Community Leaders of America club helped serve food along with the school’s CNP interns.

Color the Ridge Run a success