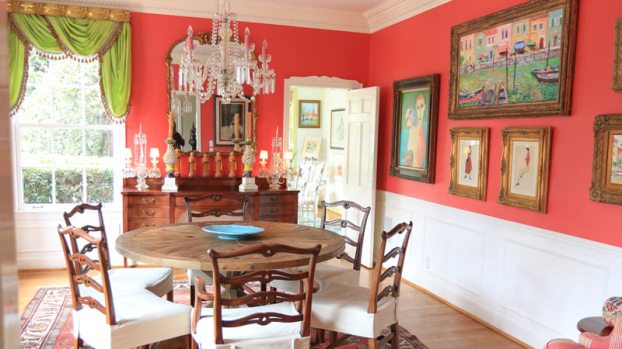 Family opens Hoover-Randle Home to the public for special events

When Barbara and Ed Randle moved into the former home of City of Hoover founder William H. Hoover in 1989, Barbara assumed the task of finding the appropriate furnishings to fill it.

The Randles were moving from a more contemporary home in Washington, D.C., to the stately, Southern Colonial home on Tyler Road in Hoover’s Bluff Park neighborhood.

“I had nothing for this house,” Barbara said.

Since then, Barbara has filled the historic home with furniture, textiles, artwork other décor from her travels around the world, to places like Morocco, Nepal, Qatar, Paris, Europe, London, Venice and China.

Each room inside the home is a cheerful amalgam of colors, textures, patterns and cultural themes from faraway foreign lands.

The Randles have opened their home to many people over the years. The city held its 50th anniversary kickoff event there in March.

The home’s history, combined with the Randles’ attentiveness to its upkeep and appearance, renders it a treasure to the community––and to anyone that visits it for an event.

Hoover built the home for his family in 1947, and they occupied it for the next 40 years.

The Randles purchased the home in 1987 and moved in two years later, after work on it was completed.

It was placed on the Alabama Register of Landmarks and Heritage in 1990.

Then, Barbara started on the enjoyable part of homeownership: Decorating.

She took her hunt for furnishings to the international level, too.

“I traveled extensively in what I call obscure countries, picking up stuff,” she said, adding she has been to China six or seven times.

From Chinese calligraphy brushes on a table in the foyer to kantha quilts from India displayed in a corner of the dining room, Barbara has traversed the globe in search of items to add to hers and Ed’s eclectic collection.

Many furnishings in the home are by New York-based company MacKenzie-Childs.

Artwork adorning the walls compliments the dynamic décor. One painting is by Barbara.

She has also sewn some of the home’s window treatments and slip covers.

“I love textiles,” she said.

Over the years, the couple has added onto the original house, creating more space that’s ideal for large gatherings.

The room the Randles refer to as the “library” is allegedly where William H. Hoover and whomever was representing the city at the time signed the city of Hoover’s incorporation papers.

Barbara said they have never known the exact square footage, but marketing materials list the home at 8,000 square feet, situated on 6 acres of “beautifully manicured gardens” and with the following amenities: A large loggia with casual seating and tables, an outdoor chapel, an outdoor fireplace, a sound system, a bar area, a creek with water features, gazebos and fountains.

Barbara and Ed have four children. Prior to moving to Washington, D.C., they lived on Foothills Drive in Hoover.

They have developed friendships with the late Mr. and Mrs. William H. Hoover’s daughters, Jane Parrish and Helen Holmes, who sometimes visit Barbara at the home.

“I just love both of them,” Barbara said.

The first wedding at the Hoover-Randle Home was held in April.

The Hoover-Randle Home is located at 2255 Tyler Road in Hoover.

“We’ve loved living here,” Barbara said. “We have a great neighborhood, and our neighbors are just wonderful. We’ve loved this house, and just want to keep it wonderful the way we feel like it is.”

PELHAM – About 6,800 pounds of paper and 1,500 pounds of electronic waste was collected at the Greater Shelby County... read more