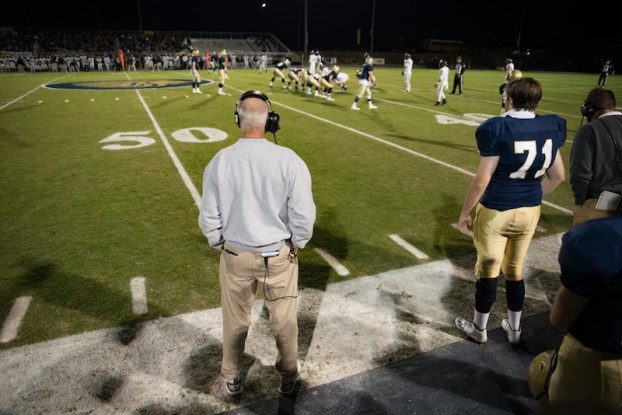 Briarwood returns a strong crew of players on both sides of the ball as they go into next year as one of the favorites in Class 5A. (File)

Over the next three days we will take a look at the spring matchups for each of the AHSAA Shelby County football teams and what to look for as we turn the page to the 2017-18 football season. The first stop along our spring tour are the 2A-5A classifications, which has a lot of strong talent coming back, including last year’s semifinal team, the Briarwood Lions.

The Briarwood Lions are coming off of one of their best year’s in the programs storied history. After losing their first game a year ago, the Lions put together a 12-game winning streak before falling in the semifinals to Wenonah, whom they beat 15-14 earlier in the year, in a tough 14-8 game to end the season. We’ll get our first look at the 2017-18 squad on Monday, May 15, at 6 p.m. when Briarwood travels to Sylacauga for its spring game, and let me be the first to tell you that they may be the favorite to win it all this year.

I say that with some confidence because the Lions get back their top two leading tacklers in Mark Hand and Gabe Russell, who combined for 275 tackles last year, their top defensive back in Carson Donnelley, their leading receiver in Carson Eddy and their leading rusher in JR Tran-Reno.

While Briarwood does lose quarterback William Gray, who threw for 1,650 yards and ran for an additional 689 on the ground, they have the fortune of replacing him with Michael Hiers who, with his strong arm and athleticism, is more than capable of filling Gray’s shoes. He, along with the offensive line, will be the things to watch for when they take the field on May 15.

Calerea hasn’t lost more than three regular season games since 2011 and they don’t want to end that streak come this fall. Our first peak at the Eagles 2017 squad will be on Friday, May 19, when they play host to Marbury.

Last season Calera had a strong year that was highlighted by three running backs topping 700 yards on the season as they made a run to the second round of the playoffs where they lost 28-8 to Carroll on the road. Trez Harris and Alex Dozier were two of those backs as they tallied a combined 1,405 yards and 19 touchdowns, but both were seniors and won’t be returning to the Eagles’ sideline this season.

DeCorean Mickens, from all accounts I’ve seen, will be a senior this season. Mickens accounted for the most yards and second most carries a season ago going off for 736 yards and six touchdowns on 95 carries and will get the benefit of running behind an offensive line with two returning starters, which is rare in high school football. There is a lot of young talent on this team and it should be fun to see what they can do.

Brandon Wilcox’s first year at the helm for the Bulldogs was a pretty memorable one. He led Montevallo to a 9-1 regular season and an appearance in the second round of the AHSAA playoffs to finish the season 10-2.

While the 2017 squad will have a slightly different look to it by losing its top two offensive playmakers in Zac Oden (QB) and Tre’Shawn Brown (WR), the Bulldogs will also return several top players including player of the year finalist Tyler Olds.

As a sophomore, Olds tallied 153 tackles, 22 tackles for loss, six sacks, three fumble recoveries and an interception. Joining him back on the defensive side of the ball will be senior Demetrius Smith, who is an anchor of a defensive end. He’s coming off of a season that featured 105 tackles, 23 tackles for loss and 13 sacks.

On the offensive side of the ball getting Daqwan Bryant and Ahmad Edwards back at the receiver position will be a tremendous help for whoever steps in as the new quarterback. That being said, filling Oden’s shoes is a tall task and will be something to watch for during the spring game as well as early next year.

There was no doubt about it last year, Vincent’s football team just wasn’t very good as they went on to win just one game during the 2016 season, but that being said, the Yellow Jackets showed some strides in head coach Wiley McKeller’s first year. After a 2015 season that featured six shutouts and only one game above seven points, Vincent came back in 2016 and only found themselves shutout once, while scoring 13-plus points in eight of their 10 games.

On Saturday, May 20, we’ll get our first look at the 2017 squad and the improvements they are starting to make as they take on Marbury in a spring game. While they lose their top offensive playmaker in Deandre Davis, they only lose a total of two other seniors in Zeb McCord and Josef Green.

This team will have plenty of young studs back on the offensive side of the ball and it should be fun to see where they stand come May 20.

By ALEC ETHEREDGE | Sports Editor Below is the scoreboard from tonight’s playoff baseball action from across Shelby County. Stories... read more