Arrest made for robbery, kidnapping at Walmart off 280

HOOVER – A Dothan man was arrested and charged with robbery, kidnapping and other charges after an incident at the Walmart store off U.S. 280 in Hoover. 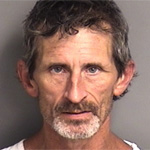 Hoover police responded to a report of a robbery at the store at 9:50 p.m. on Tuesday, May 2, according to a release from Hoover Police Department.

The victim, who is a store employee, told police she was leaving work when she was approached by an unknown male in the parking lot.

The suspect, identified as 49-year-old George Charles Harris Jr., asked her to give him a ride, but when she refused, he placed his hand in his pocket, implying that he was armed, and threatened the victim if she did not comply, according to police.

The suspect ordered the victim into her car and demanded that she drive him to an ATM. After driving about half a mile from the store, she was able to convince him that she did not have any money.

The suspect then allowed her to return to Walmart to attempt to get money from the store.

She went inside the store and called 911, police said.

Officers responded and located the suspect sitting in the back seat of the victim’s car, and he was taken into custody without incident.

A BB pistol was located in the back seat of the victim’s car, and officers also located a syringe in the suspect’s pocket, according to the release.

The case was presented to the Shelby County District Attorney’s Office, which issued warrants including robbery first degree ($60,000 bond), kidnapping first degree ($60,000), unlawful possession of drug paraphernalia ($1,000) and theft of property fourth degree ($1,000), for a total bond of $122,000.

Harris will be transferred from the Hoover City Jail to the Shelby County Jail.