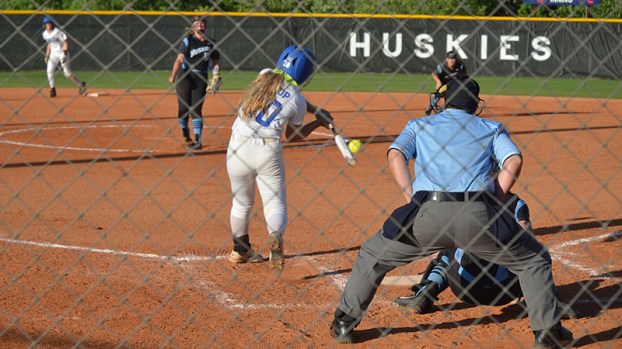 HELENA–The Helena Huskies softball team needed at least one win in the area tournament to qualify for a spot in regionals and they did just that, defeating Chelsea by a score of 4-2 on Tuesday, May 2.

Helena, Chelsea and Pelham are all competing in the double-elimination Class 6A Area 8 tournament where the area tournament winner and runner-up will qualify for the regional tournament.

After finishing as the regular season area champion, Helena received a bye and awaited the winner of the Pelham-Chelsea game in the area tournament. Chelsea defeated Pelham to set up the winners bracket game between Helena and the Hornets.

Helena got on the board quickly, as Katie Lively hit a two-RBI single in the bottom of the first inning to score Chaney Handley and Grace Robertson.

Helena’s lead would be short lived however, as Chelsea responded in the top of the second inning after an RBI single by Kathryn Shoop scored Ingram Holt and Sarah Cespedes hit a sacrifice fly to right field to score Lexie Serio to tie the game 2-2.

Despite giving up the two earned runs in the second inning, Helena starting pitcher Avery Barnett still had a stellar outing to get the win. Barnett threw a complete game allowing just three hits and striking out seven while issuing no walks.

“She has started peaking right at the perfect time,” Kouveras said. “I’d say maybe the last two or three weeks she has just been spot-on and hitting spots and working really hard at practice. It’s working out really good because she’s also cutting back on her pitch count each game so I think that’s going to help us in the long run.”

The Huskies broke the tie for good in the bottom of the third inning when Mekhi Mayfield hit an RBI single to score Lively and two batters later Mayfield would come around to score to give Helena the 4-2 lead.

Neither team would score another run over the next four innings as Helena got the win to advance in the area tournament. The Huskies need just one more win to be crowned area tournament champions.

Lively finished with two RBIs for the Huskies and Mackenzie Wilson went 3-for-3 at the plate to lead Helena.

By GRAHAM BROOKS / Staff Writer PELHAM–It was a perfect day for softball at Pelham High School on Monday, May... read more