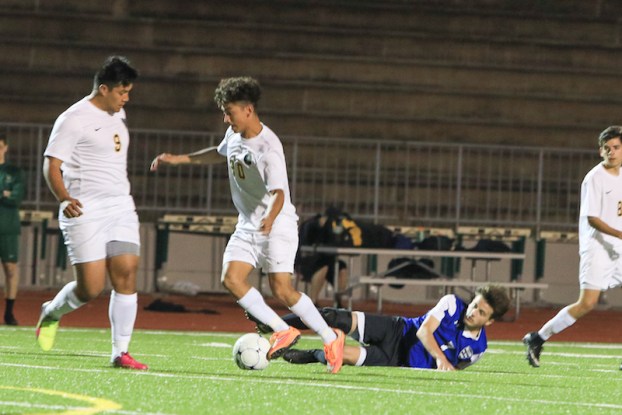 Tuesday, May 2, marked the first round of the soccer playoffs for many and the second round for several others as trips to the quarterfinals were on the line for this coming weekend. Making it to the quarterfinals, as several boys and girls teams did, puts them one win away from a spot in the Final 4 in Huntsville next week. Below we will recap all of the action and take a look at who has advanced. (Teams not featured on this list were in individual stories)

A strong end to the season that included a clutch win over Mountain Brook to seal a spot in the postseason didn’t transfer into the playoffs as the Jags had to take on No. 2 Vestavia in round two. This loss doesn’t define the Jaguars season, however, as they battled through a lot of adversity to finish with a 17-6-1 record.

The Panthers continue to look like the strongest team in 6A and have won 11 of their last 12 games including two playoff wins already. Pelham has outscored John Carroll and Northridge by a combined 6-0 and is working on three consecutive shutouts as Seth Torman continues to dominate in goal. They’ll now advance to the quarterfinals where a tough Homewood team awaits whom they’ve beaten and lost to 1-0 in the regular season. That game is Saturday at 7 p.m. at Pelham.

Probably closer than they wanted, but a win this time of the year is a win and that’s what the Lions got in their 1-0 victory over Trinity. It marked their fifth straight win and third consecutive shutout. Briarwood has given up more than two goals just twice this season, which bodes well for a run at the championship. The Lions will travel to Loveless Magnet Program on Saturday at 7 p.m. with a trip to the Final 4 on the line.

What a strong battle by this Calera soccer team to end the season. All odds were against them heading into the playoffs, but they fought their tails off and came close to upsetting Loveless to set up a rematch with Briarwood. One thing is for sure, this Eagles’ program is headed in the right direction and soccer will continue to grow for them in the future.

A week ago, Spain Park beat Mountain Brook with a playoff spot on the line, but that set up the inevitable, a matchup with the best girls soccer team in the state in Vestavia. The Jags welcomed the challenge and probably wouldn’t have wanted anyone else in the first round, but the Rebels proved their talent with a 4-0 win to end the Jags season. Spain Park had some great players this year and will have a strong future under head coach Robert Starr.

A 4-0 advantage at the half for Chelsea was all this Hornets team needed. After a slight upset of Homewood in the first round, Chelsea was playing with more momentum than they have all season and it showed off as they added three more goals in the second half to win 7-0 and advance to the quarterfinals. They face No. 1 John Carroll in the next round so it won’t be easy to advance to Huntsville, especially since the Cavaliers have given up more than one goal just three times this season, but the challenge is exciting for this Chelsea team. They’ll host the Cavs on Saturday night at 7 p.m.

It was another easy win for the Lions in their second-round game with Trinity as they have now outscored playoff opponents 16-1 through two weeks. They now get Alabama Christian in the next round on the road who has outscored opponents 17-1 in that same time span, but the Lions look to be the better team, and honestly seem to be a favorite to win it all. That game will be Thursday at 4 p.m.

It was an up and down season for the Eagles, but a thrilling first-round victory over Sipsey Valley in PKs led them to the second round where they fell to Alabama Christian 7-1. While not the best season, Calera has a lot of positives they can take away and some valuable lessons that will help this program in the future.

Eagles hang on to top Hoover, advance to quarterfinals