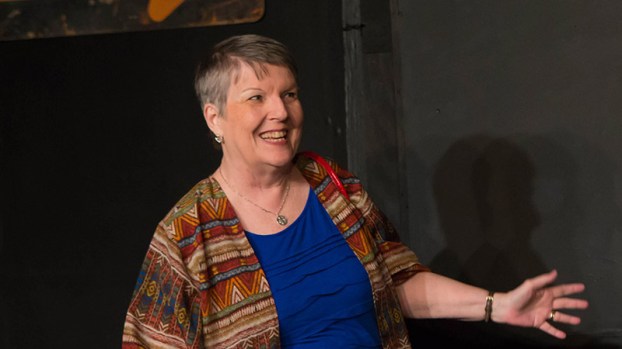 Sue Ellen Gerrells is being honored as an AACT Fellow from the American Association of Community Theatre. (Contributed/Steven Ross)

PELHAM – While theatre now plays a significant role in Alabaster resident Sue Ellen Gerrells’ life, it was not until she attended college that she found herself cast in her first theatrical role.

“In high school I was always interested in theatre, but too shy to participate,” Gerrells said. “When I went to college, I attended an audition–just to observe–and wound up cast in a small role. I found my ‘tribe’ and never looked back.”

Now, Gerrells is being honored as an AACT Fellow from the American Association of Community Theatre, and will be presented with the award at a ceremony during the AACT Fest 2017 national theatre festival in Rochester, Minn. June 26-July 1.

The honorable designation AACT Fellow is bestowed for life upon those members of AACT who over a period of years have contributed significantly to the idea and ideal of community theatre, according to a press release about the award.

“Being inducted into the American Association of Community Fellows is simply the highest honor this organization offers,” Gerrells said. “It is a lifetime appointment and there are less than 100 Fellows that AACT has chosen for this designation in the past 20 years. I still cannot believe I will be included in such a prestigious group.”

Gerrells has been involved in theatre for the last 55 years, from co-founding theatres in Singapore and San Diego, Calif., to performing and directing in Singapore, Ireland, Japan, and various places throughout the United States, she brings her love of theatre with her wherever she goes, according to the release.

Gerrells currently serves as artistic director of South City Theatre in Pelham, and has worked over the years for the Alabama Conference of Theatre, as well as the Southeastern Theatre Conference and AACT where she serves as an adjudicator, endowment fund trustee, festival commissioner, and AACT Ambassador.

Gerrells admits she enjoys the collaborative nature of the theatre and the discipline of working with deadlines.

“A theatre production is a team of creative effort with everyone working toward a common goal,” Gerrells said. “To build something from the page to the stage gives me a wonderful sense of accomplishment. When that accomplishment includes working with fellow artists who I admire and respect, it is like the icing on the cake.”

While Gerrells said it would be difficult to choose her favorite play, one of her favorites is “The Music Man,” which she has directed several times, and which she is currently co-producing this July with Jamie Stephenson at Pelham High School.

“It will be our first step in creating a summer series between South City Theatre and the Pelham School System,” Gerrells said. “This show combines the talents of students and adults in this iconic production about a ‘community.’”

AACT provides networking, resources, and support for America’s theatres, according to the release.

AACT represents the interests of more than 7,000 theatres across the United States and its territories, as well as theatre companies with the U.S. Armed Services overseas.

PELHAM – The city of Pelham will once again participate in Alabama’s back-to-school tax holiday, which is taking place in... read more