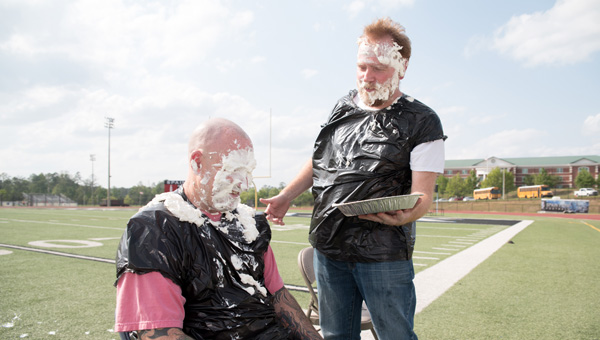 Relay For Life of Hoover City participants get pied in the face for a good cause during the event on Friday, April 28, at Spain Park High School. (REPORTER PHOTO/KEITH MCCOY)

HOOVER – Relay For Life of Hoover City raised about $20,000 for the American Cancer Society.

The event featured a number of activities, including the Opening Ceremony, Survivor Lap, Luminaria Ceremony, Closing Ceremony and awards for Best Day Of, Highest Individual Fundraiser and Highest Team.

After the Survivor Lap, survivors were invited to stay for a complimentary Survivor Dinner catered by Full Moon and served under a tent at the site, Zabala said.

Also, T-shirts designed by Hoover High School students were sold with proceeds being donated to ACS.

By NEAL WAGNER / Managing Editor ALABASTER – The number of new homes built so far this year in Alabaster... read more