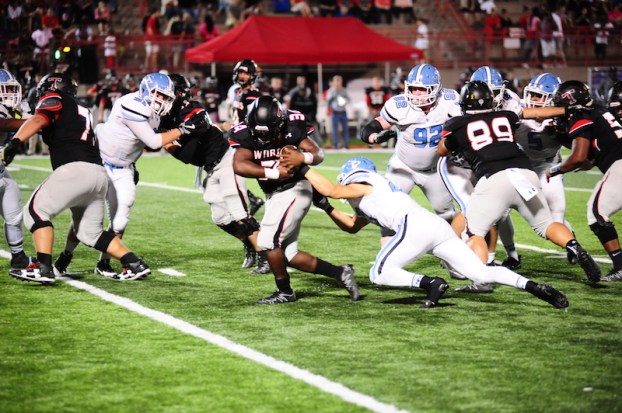 Both Thompson and Spain Park have plenty of talent back to compete for the 7A state title in 2017. It will be interesting to see how both handle the talent this spring. (File)

Now that the spring semester is coming to a close and 2017 graduates are inching closer to walking across the stage, it’s already time to start looking at the 2017-18 football season, which for many Shelby County teams will kick off in the coming weeks with their spring games.

While spring games mean absolutely nothing, it’s fun for coaches and players to get a feel for what is to come during the upcoming season, and a thrill for those of us that crave football 365 days a year, which is a solid core of people in this state.

This game will take place at Helena High School on Friday, May 19, at 7 p.m. and will feature one team that sneaked into the playoffs this past season in Oak Mountain and another that just missed in Helena. Both teams will be looking for improvement this spring in certain areas.

The Eagles will be looking for a strong defensive improvement after giving up 30-plus points in six of their eight losses last season. Four of those came by 40-pus points and one by 60-plus. While the line backing crew will lose some important seniors, the defensive line and secondary will return some important guys thanks to a deep rotation, which should help on the defensive side of the ball.

Helena was a team that consisted of a lot of young guys that rotated in and out last year, but the Huskies will have to deal with the losses of several of their top skill players on both sides of the ball. Quarterback Riley Davis is gone along with running back Devon Walker on the offensive end, while Cade Pugh and Nash Adams will both depart on the defensive side. It’ll be interesting to see how that young crew as matured in the last few months.

After traveling to Homewood for last year’s spring game, it’s the Jaguars turn to host on Friday, May 12, at 7 p.m. Spain Park is coming off an impressive year where in the regular season they picked up just two losses a 26-8 defeat at eventual state champion Hoover and a two-point 23-21 loss at home to Mountain Brook.

The Jags reeled off five consecutive games to end the season and looked strong in all of them, but went on to fall to James Clemens 21-12 in the first round ending the season with a less than stellar performance.

If you’re looking for something to watch for in their spring game against the Patriots, there are two important things, one on each side of the ball. On the offensive end of the spectrum, the Jags shouldn’t miss too much. While Hunter Howell started the majority of games last season, Braxton Barker came in late in the season and showed he has what it takes to carry the team.

Also, the emergence of D’arie Johnson was evident as he ran the ball 168 times for 881 yards and nine touchdowns. This year, Johnson won’t have to worry about playing behind All-County performer Larry Wooden, meaning the door is wide open for him to have an unbelievable season that should take a lot of pressure off of Barker. It should be fun to see how those guys gel together in the backfield, but the need for a go-to receiver is going to be something to look for.

On the defensive side of the ball, Spain Park loses a tone of senior laden players on the line, at the linebacker position and in the secondary. The real thrill in this spring game and the upcoming season will be watching to see how this defense handles the loss of some incredibly important players and who will step in to those shoes to replace them.

Thompson will host McGill Toolen this spring on Saturday, May 20, at 2 p.m. after traveling to face the 7A state champions last spring. This year, the Yellow Jackets are coming off of a runner up finish, but Thompson is the talk of the town.

The Warriors have the talent yet again, but the question is can they transfer it to good play? The simple answer is yes. This looks, on paper, to be the year for Thompson to make a run at the state championship thanks to a strong core of returning players and the addition of Taulia Tagovailoa at the quarterback position. Not only do they have strong group ready to take the field in the fall, but several are getting Division 1 looks to play at the next level, which bodes especially well when you have a coach like Mark Freeman who genuinely cares about his guys and can get the most out of them on a daily basis.

Thompson’s process will start on May 21, when we see how serious they play and how hard they work in the spring game. They are on a lot of people’s radar to bring home a state championship and if the Warriors are going to live up to the hype, the excitement has to start now.

By ALEC ETHEREDGE | Sports Editor What an incredible year it has been for the 2017 Thompson Warriors softball team.... read more