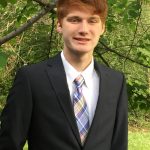 Oak Mountain High School junior Cole Sullivan was surprised to learn he made a perfect score of 36 on his ACT college admission exam. (CONTRIBUTED)

“The day of the test I asked the proctor if it would be possible if we could open the blinds, because I had heard that natural lighting helps,” Sullivan, 17, said. “There are a bunch of theories out there for things that will help you when taking the test. I don’t know if they necessarily work, but they seemed to help me.”

Sullivan took the ACT, a college admission exam, in March, and recently found out he scored a perfect score of 36 on the exam.

“I was headed home from school with my sister and got the envelope in the mail when I got home,” Sullivan said. “I am terrible at opening envelopes so it took me quite a while to get it open, and the suspense was really killing me. Once I finally got the envelope open, I yelled to my sister, ‘Oh my gosh!,’ but she was not really impressed. I then texted a picture of my score to my parents. I had to explain to my dad what a perfect score was on the ACT, but my mom called me about 30 seconds later crying because she was so happy for me.”

The ACT test is designed to measure what a student has learned in school.

A student who earns a 36 composite score is typically one who has taken challenging courses and worked hard to master the materials covered, according to Tarah DeSousa, a spokeswoman for ACT.

Students who earn a 36 on the ACT will likely garner high interest from virtually any college or university in the country, and do very well in first-year college coursework.

Less than one-tenth of 1 percent of students who take the ACT earn a 36.

This was the third time for Sullivan to take the exam after previously taking it his freshman and sophomore years when he scored a 34 both times.

Sullivan admits he did not really study for his third time at taking the test, but he did work math problems with a friend to help prepare.

“I had already scored a perfect score on my English and reading sub-scores so I didn’t really focus on those areas at all going into my third time,” Sullivan said. “I did work some math problems and did some of the practice tests available, which I think helped.”

Although Sullivan is still undecided about what he would like to major in once he attends college, he is considering attending Vanderbilt University.

He is also captain of the Varsity Scholar’s Bowl; a member of Oak Mountain Masters, which is the official student ambassadors for Oak Mountain High School; and participates on the math team.

When he is not studying, Sullivan enjoys running for the cross country and track teams at Oak Mountain High School, which he has done since his seventh grade year, and he enjoys playing various board games with his friends in his spare time.

Sullivan advises students planning to take the ACT in the future to take the test multiple times, be confident and focus on weaker areas when trying to improve the score.

“I wouldn’t really say I had a strategy going into it,” Sullivan said. “I just tried to go in feeling good and focus on what I was doing, which I think helped me in the end.”

Sullivan is the son of Sara Beasley and Jordan Sullivan and has a sister, Isabel Sullivan, who is a freshman at Oak Mountain High School.

TSGC shows off school, Kindness Project to Alabama Teacher of the Year

ALABASTER- The 2016-2017 Alabama Teacher of the Year Dana Jacobson paid a visit to the Thompson Sixth Grade Center to... read more