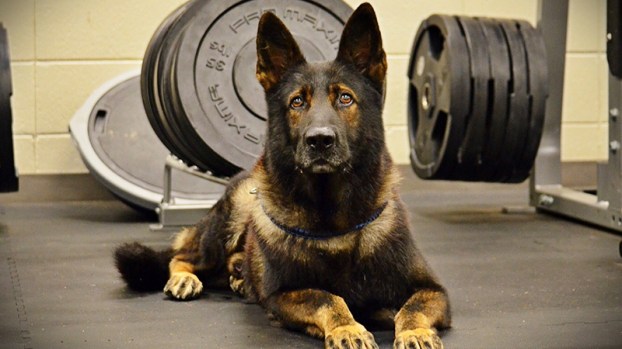 HELENA–Losing a pet is always hard, but when the pet is a companion as well as a vital part of a police department, the loss can feel even greater.

In November 2016, the Helena Police Department felt this pain when it suddenly lost its 10-year-old K-9 Bak from cancer.

The department is currently in the process of looking for a replacement K-9 and while this takes place, a plan is also in place to raise funds for a K-9 memorial to honor the former K-9 service dogs at the Helena Police Department.

Helena Police Officer Philip Richards was the handler for Bak and Richards’ daughter, Valerie Richards, is heading up an organization with the help of Helena Police Captain Ivy Penhale to raise money for the K-9 memorial.

The plan is to raise money for a bronze statue of a German Shepherd to sit atop a granite base with an etched photo of a K-9 and the handler.

Helena has experienced three diligent duos of K-9s and handlers including Hasco and Doug Jones, Victor and Penhale and Bak and Richards.

The previous K-9s’ tombstones will be in front of the statue to honor their service and the plan is to display the memorial at one of the city parks.

To help raise funds, the organization will have a booth set-up at the Buck Creek Festival near the amphitheater where there will be a donation box, T-Shirts, wristbands and visual displays on what the contributions will be bringing to life, according to Valerie.

A GoFundMe account has also been set-up to help with the memorial. To make a donation or to view more information about the memorial, visit Gofundme.com/supporthelenak9s.

Donations may also be made in-person at the Helena Police Department located at 816 Shelby County 52 West.

Authorities: woman claimed to be dying of cancer to collect donations

STERRETT – A 37-year-old Sterrett woman has been arrested and charged with theft of at least $38,000 from donors who... read more