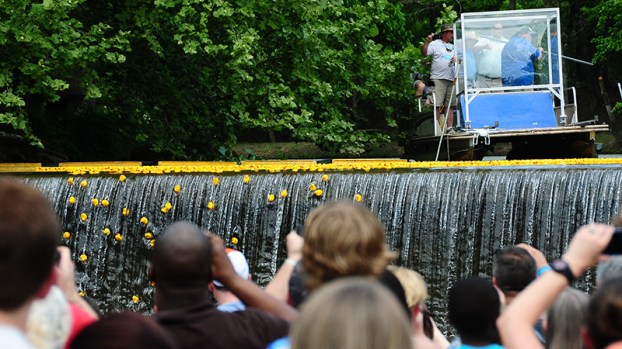 The Buck Creek Festival in Helena returns for the 16th year May 12-13. (File)

The Buck Creek Festival prides itself as being a family-friendly festival that features plenty of food and retail vendors with the staple of the festival being musical entertainment.

Ten musical groups will perform on the festival stage, kicking off with the first group at 6 p.m. on May 12 and concluding with the final performance at 9 p.m. the following day.

The Buck Creek Festival may just be a two-day event, but preparations for the festival being long before the second week in May arrives.

Festival organizers work year-round to prepare for the festival and the Buck Creek Festival Committee is made up of dedicated volunteers that help secure vendors, musical talent, negotiate costs and of course, dedicate their free time to help make the festival the best it can be.

Longtime Buck Creek Festival board member Henry Neff passed away in late 2016 but plans are in place to honor Neff at this year’s festival.

“We are sorting through ideas on how we are going to honor Henry Neff at this year’s festival,” fellow longtime Buck Creek Festival committee member Ron Holly said. “He was a large part of the festival for many years and we want to honor him for his dedication and hard work.”

Roughly 77 vendors in all will be at the Buck Creek Festival and people who attend can be assured that the vendors will include a wide range of things.

“We have secured all the vendors and about half of them are new this year,” Holly said. “We’ve added new food vendors and plenty of other vendors as well.”

Sandwiched between the musical acts and vendors is the legendary duck race in which thousands of yellow rubber ducks sweep down Buck Creek.

The duck race returns on Saturday, May 13 at 3 p.m., and those wishing to participate can purchase duck tickets at a number of retail stores around Helena or on the day of the festival.

An automatic dumper will dump the thousands of rubber ducks into Buck Creek this year as one lucky person will see their duck cross the finish line first.

Once the last tunes are played late Saturday evening, the focus of the festival turns to how the money raised can be placed back into the community.

Last year, the Buck Creek Festival raised $26,420 in total funds that was divided among multiple charities and organizations. Over the life of the festival, the total amount of money raised is $253,827. The money is placed back in the community for a variety of projects and organizations to benefit Helena.

“We’re just really proud of what we can give back to the community,” longtime festival organizer Cris Nelson said. “Our policy has been we distributed out all (festival proceeds). When we start planning, we start out with $0.”

Longtime volunteer to be remembered at 2017 Buck Creek Festival