Chelsea advances to Final 4 in thrilling upset of John Carroll 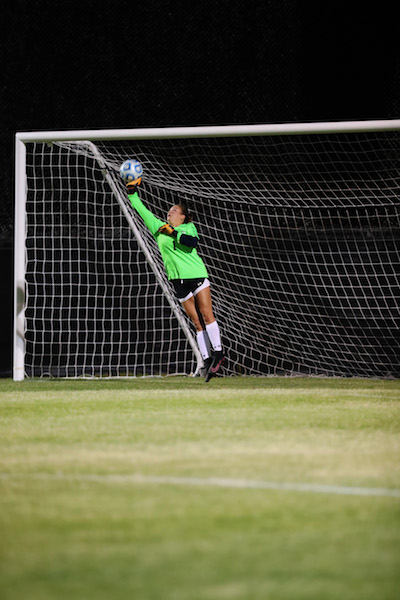 Sabrina Lane punches a ball over the cross bar for a crucial save in Chelsea’s PK win over No. 1 John Carroll as they advanced to the Final 4. (For the Reporter/Cari Dean)

CHELSEA – It was déjà vu for Chelsea and John Carroll on Saturday, May 6. For the second-straight season the two faced elimination by penalty kick shootout in the AHSAA Class 6A girls’ soccer playoffs. Only this time, it was Chelsea leading early and coming out on top, 3-2 (5-4 PKs) in the seventh round of PKs to avenge last season’s second round playoff loss.

Sabrina Lane punched the ball over the crossbar to stop the decisive John Carroll penalty kick to give the Hornets the sudden victory over the two-time defending 6A state champs. The win sends Chelsea to the AHSAA Girls Soccer Final Four for the first time since winning the Class 5A title in 2012.

“Our girls have been thinking about last year’s results for a year. They were waiting and hoping for a chance to play them again. I think mentally and physically they were ready,” said Chelsea head coach Jonathan Hammett. “We’ve had some epic battles with (John Carroll) … It was just a great game. It was a championship caliber game. You had two top teams going at it in the state and only one would move on. We’re happy it’s us, obviously.”

John Carroll rallied in the second half to overcome a 2-0 halftime deficit and forced overtime, tied 2-2. Neither team could find a golden goal, leading to a penalty kick shootout. John Carroll took a 3-2 advantage going into the fourth kick. The Cavaliers’ fourth kick was saved by Lang, followed by a shootout-tying kick from Madeline Guillen. On the fifth, and usually final PK, both teams missed wide, sending the game into extra kicks. Haley Greene and Madison Martin netted the Hornets’ first two PKS.

Lang and Morgan Bright converted Chelsea’s sixth and seventh PK attempts before Lang saved the decisive kick by the Cavs. It was the first time Lang faced PKs this season, saving two of the six she faced.

In regulation, Greene gave the Hornets their first-half lead with a pair of goals in the 29th and 37th minutes of play. The first came after stealing the ball in the box, while the second came off a pass from Lexie Duca.

“That gave us a lift and took some pressure off us and put John Carroll under some pressure,” Hammett said. “They made some adjustments at the half and put a little more pressure in the midfield. We were on our heels a pretty good bit.”

Kelly Ann Davies put John Carroll on the board 13 minutes into the second half and Abby Bernal tied it with 19 minutes to go in regulation.

Chelsea (15-6-2), which is making its third overall trip to the AHSAA Soccer Final Four, is riding a program-record 10-game win streak. The previous mark was six wins.

“We’ve been playing really well of late. We got off to a slow start at the beginning of the year and spent a lot of time headed into spring break trying to search for the right combinations,” Hammett said. “One of the things that plagued us early in the year is playing with consistency, and I think that was a point of emphasis as the year progressed. The girls bought into that and stepped their game up after spring break and are playing really consistent ball right now. That’s been fun to watch.”

The Hornets will meet Northview in the Class 6A semifinals on Friday, May 12 at the Huntsville Soccer Complex at 9 a.m. Northview advanced in a penalty kick shootout over Baldwin County. In the North semifinal, Pell City will play Southside-Gadsden. Both semifinal matches are scheduled for 9 a.m. The Class 6A championship is scheduled for Saturday, May 13 at 10 a.m. Admission is $10 per day.

Pelham takes down Homewood in PKs to advance to Final 4

By ALEC ETHEREDGE | Sports Editor PELHAM – Whenever the Pelham Panthers and Homewood Patriots square off on the pitch,... read more