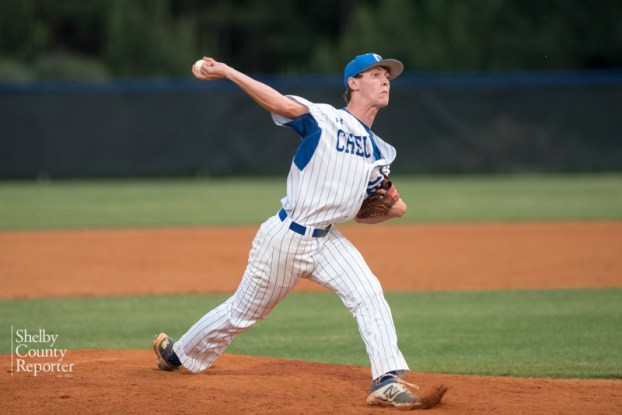 Chelsea's 2017 baseball season came to an end on Saturday, May 6, in the quarterfinals after being swept by defending 6A state champion Hillcrest-Tuscaloosa. (Reporter photo/Keith McCoy)

CHELSEA – Finishing with just 12 wins a season ago, just finishing above .500 during the 2017 season would’ve been plenty enough for Chelsea’s baseball squad, but what head coach Michael Stallings was able to do with this team in turning them into a 27-win team that finished the season 12 games above .500 was and made a run all the way to the quarterfinals of the playoffs was simply astonishing.

Yes, unfortunately the fact that their season has come end means the Hornets fell to Hillcrest-Tuscaloosa on Saturday, May 6, in the quarterfinal round of the playoffs as the Patriots swept Chelsea 8-1 and 7-2 to keep them from reaching the semifinals.

It was really all of four innings in the quarterfinals that ended their season as they gave up three runs in two innings of both game one and game two to seal their fate, but other than that, Chelsea was able to hold its own against the defending 6A state champions.

Game one’s struggles started directly in the top of the first inning as the Patriots jumped out in front 3-0 thanks to an Hunter Kamplain three-run home run over the center field wall. Chelsea tried their best to answer back in the bottom half of the inning and put two on with two outs for Riley Watkins who drove an RBI-single to left field to bring in Clay DeWeese.

That’s all Chelsea was able to bring home, however, as the game got quiet for the next two innings.

Starting in the top of the fourth, Hillcrest strung together innings of one run, three runs and one more run to take an 8-1 lead after six. The Hornets just had no answer at the plate as the Patriots went on to outhit them 11-4 to take a game-one win.

Tristan Sulser, DeWeese, Watkins and William Root were the only Chelsea players with a hit, and Watkins was the only one to drive in a run. Sam Towery went five innings allowing six earned runs, two home runs and nine hits, while striking out four.

With their playoff lives on the line in game two for the second week in a row, Chelsea needed to come in clutch like they had done so well in the first two rounds.

In the top of the first, the Hornets played like they needed to scoring two runs to start things off and give them a bit of momentum. Sulser and DeWeese started the inning with a single and a walk. Thanks to some great base running, Sulser was able to score from second on one error, while DeWeese made his way to third. Josh Gregg then hit a ground ball to second base that allowed DeWeese to come the extra 90 feet and give the Hornets an early 2-0 lead.

The Patriots, however, did one better by putting three runs on the board in the bottom half of the inning thanks to two singles, a hit batter, a walk, a passed ball and an error by the catcher to take a 3-2 lead.

Chelsea was unable to answer the remainder of the game as Hillcrest put its fourth three-run inning of the series on the board in the bottom of the fourth and then followed that up with one more insurance run in the fifth to tally the final score of 7-2.

Just four different Hornet batters were able to pick up a hit in the game as they were outhit again, this time 9-4.

While the incredible season has come to an end and it’s the end of the road for several seniors on this Chelsea squad, what they did could arguably be construed as one of the greatest in the programs history, hold your head high and stay proud.

Shelby County will have 7 soccer teams in respective Final 4