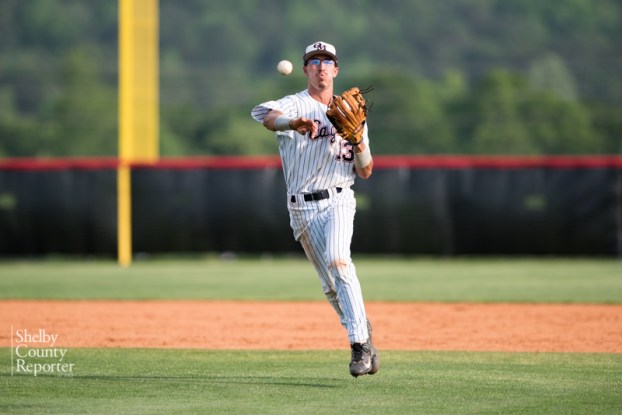 Oak Mountain split it's doubleheader with Vestavia Hills on Saturday, May 6, and will face a winner-take-all game on Monday, May 8, at 5:30 p.m. as they look to advance to the semifinals. (Reporter photo/Keith McCoy)

VESTAVIA – Oak Mountain had a trip to the semifinals of the state playoffs at the tip of their fingers after winning game one on Saturday, May 6, against Vestavia, but an incredible game two that went 12 innings saw the Rebels explode for six runs in the top of half of the 12th to take game two and split the series at one game apiece.

They’ll now face off in a rubber match game on Monday, May 8, at 5:30 p.m. to determine who advances to the semifinals and who will see their season come to an end.

The Eagles scored two runs in the top of the second inning in game one thanks to three singles a walk and a fielder’s choice. That’s all the insurance they needed as Gene Hurst was phenomenal on the mound going on to pick up yet another complete game.

Working with the lead made life a lot easier for Hurst, who went on to throw 95 pitches allowing just three hits and one walk while striking out six batters. He made life really easy for the Eagles in game one, which set up well with another ace in Joseph Hartsfield prepared to start game two.

Five different Oak Mountain players picked up a hit in the game, but only Hartsfield and Logan Sheaffer were able to drive home a run as they picked up an RBI apiece.

Hartsfield was pure brilliance on the mound in game two throwing 9.2 innings of unbelievable ball. He tossed 119 pitches allowing just one hit while striking out 11 batters.
Unfortunately for Oak Mountain, he eventually had to come out of the game in the top of the ninth inning as neither team had been able to break through in the scoring column in a pitcher’s duel.

Vestavia’s Caden Lemons was able to squeak out one more out than Hartsfield as he went 10 innings allowing just three hits, five walks and no runs while striking out five.

With both starting pitchers out of the game it was going to come down to which bullpen would give in first. It ended up being the Eagles in the top of the 11th as Vestavia’s Ross Covington was able to score on a passed ball.

It’s funny how things work though. You would have thought after not being able to score the entire game, one run was going to be enough for the Rebels to hang on and win, but Oak Mountain came right back in the bottom of the 11th and answered with its first run of the game.

Ethan Holsombeck drove a two-out double to center field, which was followed by a hard hit ground ball from John McDonald. McDonald was able to reach on an error by the second baseman, which allowed Holsombeck to come in to tie the game.

Vestavia then let loose in the top of the 12th scoring two quick runs to take a 3-1 lead before Andrew Knight drove a deep fly ball over the left field wall for a grand slam to bust the game open and give the Rebels a 7-1 lead, which they held onto for the win.

Oak Mountain outhit Vestavia 6-3 as five players picked up at least one hit, but the Rebels bullpen was the difference maker in preserving the win.