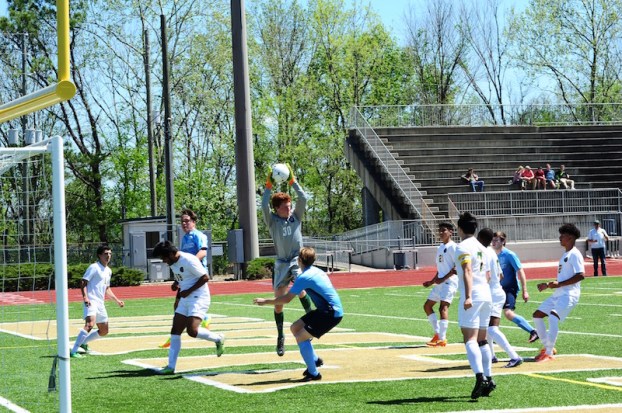 Pelham goalkeeper Seth Torman had three big saves in PKs to allow his team the chance to take down Homewood and advance to the Final 4. (File)

Pelham takes down Homewood in PKs to advance to Final 4

PELHAM – Whenever the Pelham Panthers and Homewood Patriots square off on the pitch, you see two of the more accomplished and tradition rich programs in the state of Alabama that have become accustomed to success.

On Saturday, May 6, that tradition was in full affect but this time around with a little more on the line than usual as the two battled for one spot in the Final 4 in Huntsville. After a thrilling match the two teams ended up in penalty kicks to determine who would advance and who would have their successful season come to an end.

Thanks to three crucial saves by senior goalkeeper Seth Torman and a clutch PK from Jose Lopez with the score knotted at two apiece, the Pelham Panthers are headed back to the Final 4 for the third time.

“We have a lot of respect for that Homewood program,” Pelham head coach Patrick McDonald said. “I’m so proud of our kids because they gave me everything they had tonight and left it all out on the field.”

In the shootout, Homewood got the honor and scored first, but Braxton Jeffcoat answered the Patriots with a good PK of his own to square the shootout up at 1-1. Torman made his first save of the PKs during Homewood’s second penalty kick to hold the score at one apiece giving the Panthers a chance to take control, but the Homewood keeper was able to make his first save in a big clutch moment.

In a battle of the goalkeepers, Torman made his second block of the shootout, which was followed by another stop from the Patriots as neither keeper wanted to be the reason their team’s season ended.

Homewood finally put an end to the back-and-forth block affair by scoring their second goal of the shootout to give them a 2-1 advantage. Armando Valencia answered for the Panthers yet again as his goal tied things back up at 2-2. This is when Torman made the save of probably his life picking up the third of the PK shootout, which set up Lopez for the game-winning goal to give Pelham a 3-2 PK win.

“In the shootout, I was just hoping I was going the right way in the net,” Torman said of his tremendous saves. “Somehow I chose right on a few of those and was able to help the team out in a big spot. Now I just want to get past the next round and play in the finals.”

Regulation and OT consisted of a hard-nosed attack from both teams, which led to a quiet first half as both defenses played outstanding. While Pelham was more in attack mode, the Patriots back line did a solid enough job to take a 0-0 tie into the halftime break.

It took 13 minutes of play in the second half before Pelham’s aggressive play finally paid off as Lopez was able to grab the game’s first goal with 27:27 left to play.

The Panthers defense held strong for a good chunk of the next 16 minutes as it looked like they were on their way to a 1-0 win and a spot in the Final 4. Unfortunately for Pelha with 10:42 left in the game, Homewood was able to put through their first goal of the game after being shutout for the first 69 minutes of the match.

With the game tied at one apiece, Homewood had some momentum and started putting some heavy pressure on the Panthers, but Torman stepped up like the experienced senior he is and kept his composure making several important saves to keep his team’s season alive as the game remained tied at the end of regulation.

Both overtimes were quiet as neither team got much going offensively, which eventually led to Lopez’s game-winning goal in PKs and a spot in the Final 4.

“We are hoping the third time will be a charm in Huntsville,” McDonald said. “Our kids are experienced enough and they don’t want to come back on Friday without the blue map.”

Pelham will play Daphne on Friday, May 12, at 1 p.m. at Huntsville’s John Hunt Park and would play the championship game the following day.

By Chris Megginson | Special to the Reporter HOOVER – Temperatures cooled to a record low in Central Alabama on... read more