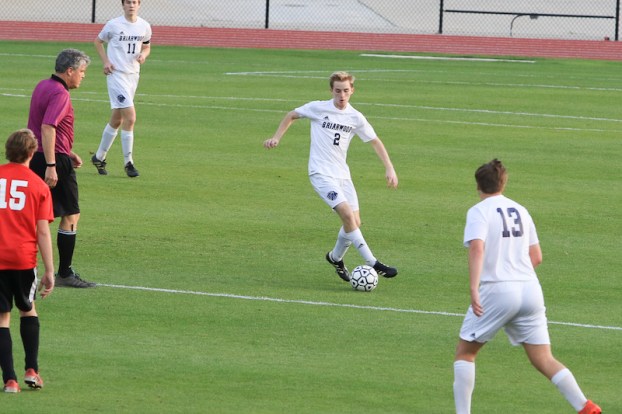 The Briarwood boys will be one of the seven Shelby County soccer teams traveling to Huntsville for the FInal 4. (For the Reporter/Dawn Harrison)

Shelby County will have 7 soccer teams in respective Final 4

Shelby County has become somewhat of a hot bet for high school soccer in the state of Alabama. After having 14-16 teams ranked inside the top 10 for the majority of the 2017 season, the county will now see seven of those teams make a trip to Huntsville between Thursday, May 11 and Saturday, May 13 as they look to bring home a state championship.

Below is a recap of all quarterfinal action from Saturday, May 6. (Chelsea girls and Pelham boys received individual stories)

For the seventh straight year the Oak Mountain Eagles are headed to the Final 4 in Huntsville after taking down Grissom 3-1 in the quarterfinals. All three goals, one from Clay Holstad and two from Chad Jeter, came in the first half of the game as the Eagles set the tone early.

No. 1 Oak Mountain will now move on to the semifinals where they will square off against No. 2 Vestavia on Friday, May 12 at 3 p.m. The two teams met in their season openers back on Feb. 13 and battled to a 2-2 draw.

The Briarwood Lions side of the bracket in the 4A-5A playoffs set up for a run at the state championship and they have taken advantage of it picking up their sixth straight win and third consecutive playoff win as the took down Loveless Academic Magnet Program 3-1 in the quarterfinals.

They will move on to the Final 4 where they will face Andalusia on Thursday, May 11, at 5:30 p.m. in Huntsville. According to eurosportscoreboard.com Andalusia has only lost one game this season making them a tough out, but the Lions defense and offense is clicking on all cylinders right now.

Indian Springs is on fire, it’s as simple as that. After taking down Montgomery Academy 3-0 to advance to the Final 4, Springs moved its overall record to 21-2-6 as they haven’t lost a game since March 4, and have gone 13-0-6 since then. They have allowed more than one goal just twice this season, both were two-goal games, and have posted 15 shutouts including two straight.

The rematch is set between No. 1 Vestavia and No. 2 Oak Mountain after the Eagles took down Bob Jones 3-0 on Saturday to advance to the semifinals. Goals came from Julia Pack, Hailey Whitaker and Sara Scherer in the win.

Combined, the Eagles and Rebels have just three losses this season, two from Oak Mountain and one from Vestavia. On March 6, the two met in their only matchup of the season with the Rebels coming out on top 2-0. It’s honestly okay to treat this as the state championship game as they are by far the two best teams in the state. The two will square off in Huntsville on Friday, May 12 at 1 p.m.

Briarwood picked up its second mercy-rule win of the postseason with an 11-1 win over Alabama Christian on Thursday, May 4. The Lions have now outscored opponents 27-2 in the playoffs and look to be the favorite to win the state championship in the 4A-5A division.

They will take on No. 6 Faith Academy, who has had some close low scoring games through the first three rounds. That game will kick off at 3:30 p.m. on Thursday, May 11 at John Hunt Park in Huntsville.

Unfortunately, Westminster at Oak Mountain’s first trip to the second round of the playoffs ended in a loss, but as young as this team is, they will have plenty of experience back next year to try and make even more school history. The Lady Knights fell 5-3 to No. 3 Montgomery Academy in the quarterfinals to end their season in a high-scoring affair.

Knights advance to second round for first time