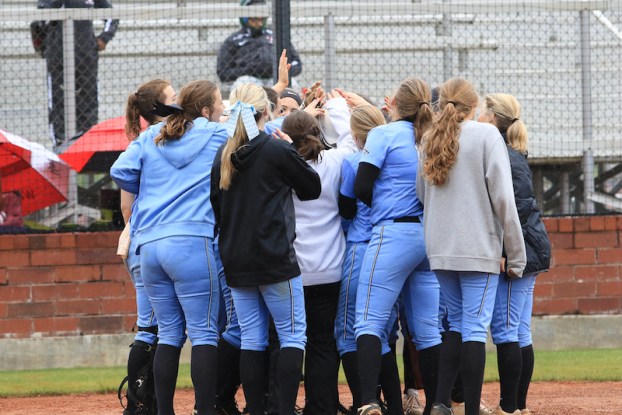 Spain Park swept the Class 7A Area 6 tourney this week and advances to a regional that features Tuscaloosa County, Vestavia and Oak Mountain as they look to head back to the state tournament to redeem last year’s heartbreaking loss. (For the Reporter/Dawn Harrison)

HOOVER – For the second day, Spain Park enacted the mercy rule to defeat Oak Mountain, this time for an 11-1 win on May 6 to claim its third-consecutive Class 7A, Area 6 softball tournament title.

The Jags (43-7) completed their sweep of the tournament, outscoring opponents 42-4 with 43 total hits. A bulk of the production came off Oak Mountain pitcher Clara Fuller in two games.

“It was kind of surreal. It was awesome. I didn’t expect that kind of offensive output against such a good team. I was expecting two really close games. The offensive output was crazy,” said Spain Park head coach C.J. Hawkins. “The seniors played amazing. This is our third in a row. That’s really tremendously. It’s a super, super special group and kind of sad too for the last time to play on our field.”

Similar to its previous two games, Spain Park jumped on the board early. Maddie Majors led off the bottom of the first with a single, followed by an RBI double from Julianna Cross. The Jags plated another run on an error and RBI fielder’s choice by Caroline Parker to make it a 3-0 game.

Oak Mountain’s only hits and run came in the top of the second with Abbi Brown and Abby Jones delivering one-out and two-out singles, respectively. Jones’ hit to center scored Brown to make it a two-run game, 3-1.

Mary Katherine Tedder made it 5-1 in the bottom of the second with a two-run home run down the leftfield line, and the Jags added two more in the third on a two-RBI single by Majors. It was Tedder’s second home run of the tournament.

“MK hitting home runs in both games is super special. Everybody’s been pitching around her all year, and she made some adjustments at the plate,” Hawkins said.

Winning pitcher Annabelle Widra struck out eight and allowed only two hits in the circle. She had 14 strikeouts in two five-inning wins during the tournament.

“Annabelle was on point and our defense played really well and made some great plays,” Hawkins said.

At the plate, Widra homered for her only hit of the game to lead off the fifth and final inning, making it 8-1 Jags.

With two outs in the fifth, Cross doubled and Tedder singled to place two in scoring position. Jenna Olszewski doubled in one, and then Parker hit a line drive up the middle on a 1-2 count to score two and end the game, 11-1.

Majors and Tedder each hit 3-for-4 on the day, with Cross, Olszewski and Parker having two hits apiece. Parker and Tedder drove in three runs each, giving Parker a team-best nine RBIs in the tournament.

Four Jaguars hit better than .600 during the tournament. Tedder led the way with a .750 average (6-8) in three games, scoring seven times and driving in five. She had two home runs. Majors led all players with seven total hits while hitting .636 (7-11) with four runs scored and four RBIs. Cross hit .667 (6-9) and matched Tedder or the most runs scored (7), while driving in four. Parker finished the three days hitting .625 (5-8).

“They were all clutch, and they produced. When they do that, we’re going to be really hard to beat. They adjusted to the pitching,” Hawkins said. “Clara’s a tough pitcher to face. We’re going to have to figure out how to adjust again next week, if we get the opportunity to see them.”

“The format’s kind of strange, we get through them (Oak Mountain) and now we have to turn around and play them again probably. It’s a tough format,” Hawkins said. “I think they’re all deserving … It’s going to be hard to make it out of our region. It’s a juggernaut.”

Earlier in the day, Oak Mountain defeated Mountain Brook, 8-1, to clinch its berth to the North Central Region Tournament.

“The main focus was that was the most important game of the season. Our backs were against the wall. If we lost, our season was over. If we won, we kept moving on. They understood the circumstances and did what they did,” said Oak Mountain Coach Kaitlin Griffin.

Jenna Galloway put the Eagles on the board in the top of the third, scoring on an error. She added a sac fly RBI in the fourth to make it 3-0 after Maddie Katona tripled to center to drive in the Eagles’ second run. Abby Jones added a three-run homer in the fifth to extend Oak Mountain’s lead to 6-0.
Mountain Brook’s Abby Russell was hit by a pitch to lead off the bottom of the fifth and scored on a two-out error for the Spartan’s only run.

The Eagles plated their final two runs in the sixth on an RBI double by O’Neil Roberson and line-drive RBI single by Abbi Brown.

Katona led the Eagles with three hits in the game, while Galloway and Brown each had two. Five other Oak Mountain batters collected a hit, giving the team 12 for the game.

Jones went the distance on 89 pitches for the win. She allowed only one hit, one walk and an unearned run, while striking out nine Spartan batters.

Up next, Oak Mountain will join Spain Park, Vestavia Hills and Tuscaloosa County in the North Central Region Tournament, taking on Vestavia in the first round. The game is scheduled for 7:30 p.m. on May 11 at Field 6.

“The regional is going to be a meat grinder. We knew that at the beginning. It was last year, and it’s going to be again this year,” Griffin said. “I think our Vestavia game will be a really good one. We played them last year at Regional and they got a win, and I think this year is going to be a little different. I think anybody can come out of it.”

Chelsea advances to Final 4 in thrilling upset of John Carroll

Sabrina Lane punches a ball over the cross bar for a crucial save in Chelsea’s PK win over No. 1... read more