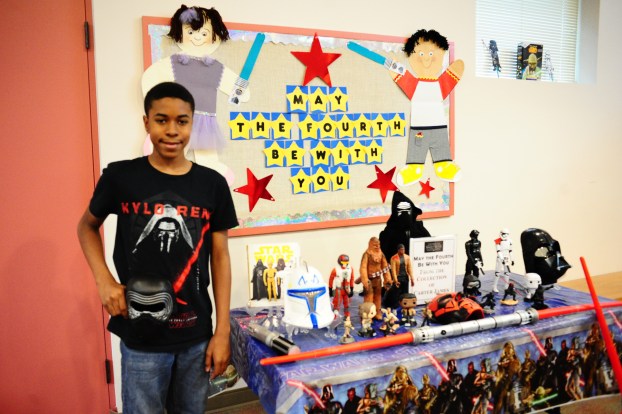 13-year-old Carter James displays his Star Wars paraphernalia at the Albert L. Scott’s “May the Fourth Be With You Day.” (Reporter photo/Amalia Kortright)

Albert L. Scott celebrates ‘May the Fourth Be With You Day’

ALABASTER -The Albert L. Scott hosted a Star Wars-themed celebration on Thursday, May 4. According to Children’s Librarian Frances Smith, “May the Fourth Be With You Day” was set on that particular day as a play-on-words from the famous movie phrase.

“Star Wars is 40 years old, so it spans across generations,” Smith said.

During the event, visitors played with Legos and colored and ate Star Wars-themed snacks. 13-year-old Thompson Middle School student Carter James said he was happy to be able to display his collection of Star Wars items for other fans to see.

Smith said the library has hosted the event for several years. According to her, the event typically draws a large amount of people due to the popularity of the Star Wars franchise.

“It varies from year to year but we have a good crowd each year,” Smith said. “When the original movie came out, I didn’t want to see it. I thought it was going to be like Star Trek. I ended up seeing it six times, and I wrote a really good term paper on it in college.”