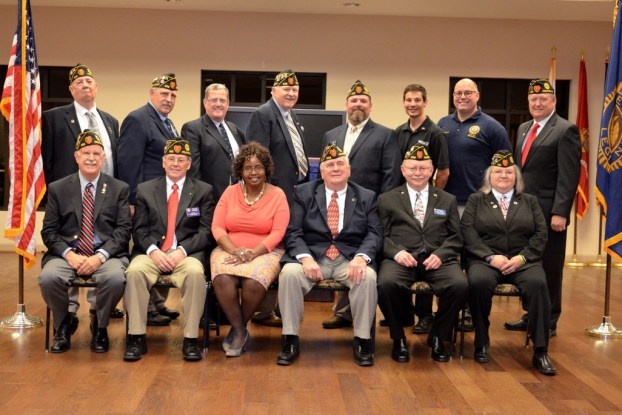 Newly elected officers for American Legion Matthew Blount Post 555 gather after being sworn in during an installation ceremony May 4 at the Pelham Senior Center. (Contributed)

PELHAM – On Thursday, May 4, American Legion Matthew Blount Post 555 welcomed a new commander, Tom McDaniel, after Barry Blount stepped down from the position to assume command of District 23 in central Alabama.

“It all started as a dream in memory of my son,” Blount said as he surrendered command of the post.

Post 555 is named for Blount’s son, 2nd Lt. Matthew Blount, who served in the Army for seven years. After his discharge from active duty, he was a student and ROTC cadet at Jacksonville State University. In 2012 he died from a rare form of cancer just days after being commissioned as an officer in the Army Reserve.

A ceremony was held at the Pelham Senior Center during the post’s regular monthly meeting. Blount, a retired Army command sergeant major, led the effort to establish an American Legion post in Pelham three years ago and served as the post’s first commander.

McDaniel is charter member of the post and served as first vice commander prior to becoming the commander.

“We’ve grown, we’re part of this community and we’ve proven ourselves,” Blount said. “That’s because we’re here for the right reasons. We’re not here to be a social club, we’re here to serve this community.”

In the three years since the post was chartered, it has grown rapidly – going from 30 to 160 members.

Tony Berenotto, commander of Jefferson County’s American Legion posts, said Post 555’s rapid and sustained growth has attracted the attention of Legion officials throughout the nation. Berenotto added that it is unusual for such a young post to grow so quickly and to have an American Legion Auxiliary, a Sons of the American Legion chapter and a Legion Riders group.

Each of the last three national commanders of the American Legion have made it a point to visit Post 555.

Also during the meeting, Anita Bennett, who serves as the post’s second vice commander, was named the post’s Legionnaire of the Year, a title bestowed upon a member who has distinguished themselves through dedication and service to the Legion, the local community and especially to veteran causes.

Bennett is an Air Force veteran and currently works at the University of Montevallo as a dispatcher for the campus police department.

PELHAM – The Pelham City Council made three appointments to the Commercial Development Authority at meeting on Monday, May 1.... read more