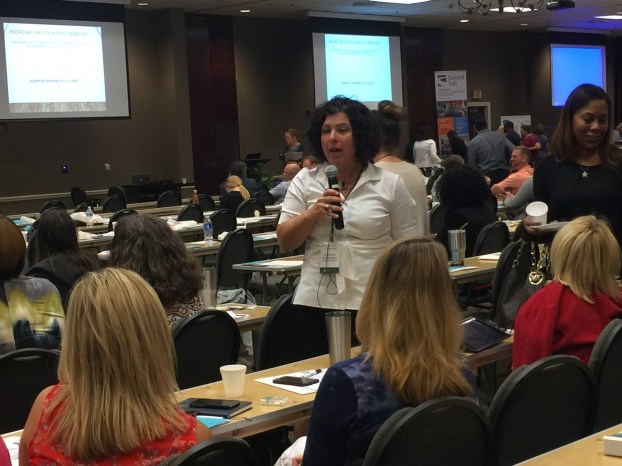 Keynote speaker Dr. Shannon Murphy answers questions from the audience at the second Alabama Adolescent and Young Adult Conference on May 3 at the Pelham Civic Complex. (Reporter photo/Briana Harris)

Those in attendance learned about marijuana use among the adolescent and young adult age groups, the gender differences in treating substance abuse among the targeted age groups, codependency and how social media plays a role in drug usage.

Camp said the purpose of the conference is to bring continued awareness and education about substance abuse issues facing adolescents and young adults in the southeast.

“We identified that there was a need for education for professionals who work with those age groups,” Camp said. “We wanted to bring professionals together to address these issues. The first year we held this conference it filled up and we had a 20-person waitlist so we decided to make it an annual thing.”

The conference included four sessions that focused on different aspects of substance abuse.

For example, Murphy said the number of adolescents smoking marijuana has increased and the potency of marijuana is not regulated. Murphy said many people use marijuana as a means to treat an illness or disorder without knowing the potential health risks involved.

“Public policy is ahead of the science on medical marijuana,” Murphy said. “Scientific data shows significant health impacts associated with marijuana. Just because something is legal doesn’t mean its safe. That’s not something that adolescents realize.”

In 2016, Leni’s Law was passed in Alabama. The law makes it legal for people with seizure disorders or other debilitating medical conditions to use cannabidiol, a derivative of cannabis, that contains 3 percent THC.

To date, the U.S. Food and Drug Administration has not approved any product containing or derived from botanical marijuana

“Taking any position otherwise would not be based on scientific evidence and could unnecessarily place patients at risk,” Smith stated.

Pelham road to close for construction

Pelham – Ball Park Road, which was renamed Pelham Park Boulevard, will be closed beginning Wednesday, May 10, and will... read more