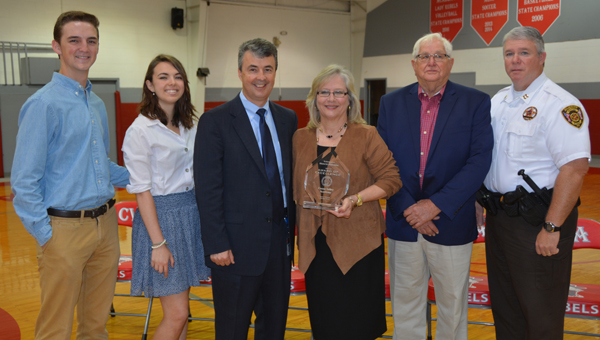 HARPERSVILLE – Coosa Valley Academy on Friday, May 5, was presented the Attorney General’s Safe School Initiative Award of Excellence for the second consecutive year.

Alabama Attorney General Steven T. Marshall presented the award at an assembly in the school gymnasium.

“You’re not here because I’m here,” Marshall said. “I’m here because of you. We thank you for your commitment to this issue.”

Coosa Valley was one of nine award winners across the state, and was recognized as the winner for private school in the central region of Alabama.

Schools were selected as winners from seven Alabama State School Board of Education districts, as well as private schools for two regions of the state.

“I am pleased to carry forward an important tradition of the attorney general’s office, to recognize schools throughout our state for dedication and excellence in keeping students safe,” Marshall said. “Each day that parents leave their children at school, they are entrusting what they hold most precious into the care of schoolteachers, principals and other staff.

“With these awards, we honor those who have achieved particularly high standards and set examples that others may follow. We are grateful for their service and commitment to protecting the children of Alabama.”

CVA Headmaster Pam Lovelady thanked those who help make the school safe, including town officials, police and firefighters, and school board members.

“It takes a whole community to make this work,” Lovelady said. “Just know that every day and every year we try to improve on that.”

Lovelady said safety is commonly cited as a strength of the school in parent and student surveys.

The headmaster said all windows and doors in the school have been replaced to include lockdown features, there is surveillance inside and outside the facility and Harpersville Police Chief Jimmy Macon routinely makes rounds to check doors as well as takes part in school functions.

At the presentation ceremony, which was attended by students of all ages, SGA chaplain Fisher Williams offered a prayer, and SGA President Eliana Fulbright introduced Marshall.

Marshall called CVA a “shining star” in the state and noted the opportunities for older students to mentor younger students in a small school environment.

“They’re going to follow in your footsteps in the future,” he said.

Coosa Valley’s volleyball team, which recently won a state championship, was recognized and presented Marshall with a volleyball signed by the players.

Recipients of the annual Safe School Initiative Award of Excellence are determined by a panel of judges that includes former educators and public safety representatives, Marshall said.

“In making this decision, judges noted many things that distinguished Coosa Valley Academy: excellent relationship and interaction with emergency officials and local authorities, use of emergency ‘go bags’ and its student resource officer patrol,” Marshall said.