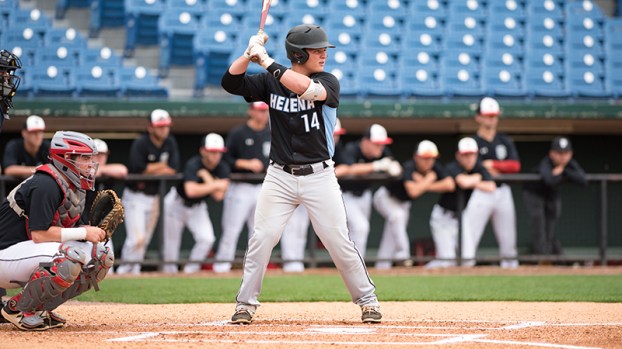 Helena catcher Sam Praytor (14) hit a three-run homerun in game one of a playoff series against Baldwin County on May 5. (File)

HELENA–For the second time in three seasons, the Helena Huskies baseball team will advance to the final four of the AHSAA playoffs with a trip to Montgomery on the line.

In round three, the Baldwin County Tigers traveled to Helena for a best-of-three series and once again, the Huskies proved they are a team on a mission by sweeping the series with two shutouts, 7-0 and 14-0 respectively.

Through the first three rounds of the playoffs, Helena has dominated their opponents. The Huskies have outscored Russell County, Opelika and Baldwin County by a combined score of 38-2 in six games. Each series has been a sweep.

To say that Helena starting pitcher Riley Davis has found his groove in the postseason might be an understatement. For the third straight series, Davis has thrown a three-hit complete game shutout to record a win.

Helena’s offense also added seven runs in the game, although one or two would’ve probably gotten the job done with the way Davis pitched in game one.

The Huskies began the game with three runs in the bottom of the first inning after back-to-back walks came back to haunt Baldwin County.

Sam Praytor cleared the bases with a towering home run to center field to give Helena a 3-0 lead and the momentum.

The Huskies added two runs each in the third and fourth innings to pad their lead and take a 1-0 series lead.

Praytor led Helena with three RBIs and finished 2-for-3 at the plate. Trevor Bell was also impressive for the Huskies going 2-for-3 with two RBIs.

In game two of the best-of-three series, Helena did what they did in game one, except double the run total to sweep the Tigers in dominating fashion.

The 1-2 combination of Davis and Troy Cordrey on Friday nights has been a major key to the Huskies’ success thus far in the playoffs.

Helena put up seven runs in the top of the first inning to give Cordrey a large lead to work with and he didn’t squander the opportunity.

Cordrey threw a complete five-inning game while allowing just three hits. The game was called in the bottom of the fifth inning due to the 10-run mercy rule. Cordrey issued no walks and struck out five on just 63 pitches while finding the strike zone on 68 percent of his pitches.

Helena touched up Baldwin County starting pitcher Chase Overstreet for seven runs on five hits in the top of the first inning. Overstreet lasted just two and a third innings.

Even more impressive, Helena scored the seven runs all with two outs in the inning after eight straight batters reached base. During the two-out rally, the Huskies reached base with five singles, a double and two walks.

The remainder of the game, Helena pushed across two runs in the second innings, one run in the third and four runs in the fifth inning in the victory. As a team, Helena finished with 17 hits.

Jake Busby, Brooks Brophy, Cordrey, Nick Ragsdale and Bell all had multiple RBIs in the game.

In the semifinals, defending 6A state champion Hillcrest-Tuscaloosa will travel to Helena for a best-of-three game series with a trip to the state championship on the line.

If the Huskies defeat Hillcrest-Tuscaloosa, it will be their second trip to the state finals in three seasons.