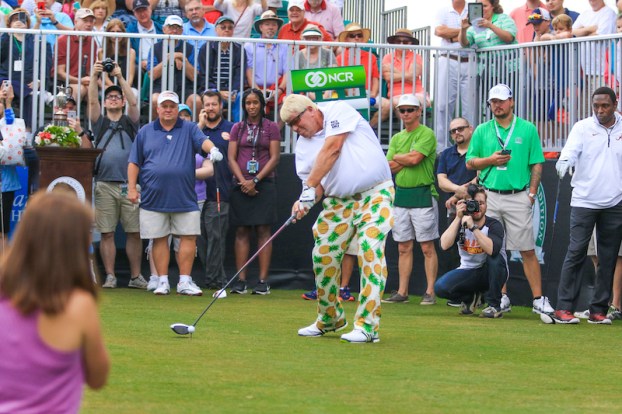 Fan favorite John Daly will be a strong favorite coming into this year’s Regions Tradition after picking up his first ever Champions Tour win this past weekend at the Insperity Championship. (File)

HOOVER – We are inching closer to the 2017 Regions Tradition returning to Greystone Golf and Country Club as several of the best Champions Tour golfers look to compete for the first major of the 2017 PGA Champions Tour season, which goes a long way toward winning the Charles Schwabb Cup.

It’s not just the professional golfers that drive fans out in droves to this popular event that is back at Greystone for the second consecutive year after a stint at Shoal Creek, but also the famed celebrity pro-am that kicks the tournament off Wednesday, May 17.

Paul Finebaum of the SEC Network will also be broadcasting live on site from 2-6 p.m. to cap off the opening day of festivities. Also broadcasting live throughout will be popular Birmingham talk show Rick and Bubba.

The pro-am will begin with tee times starting at 7 a.m. and will feature both a morning and an afternoon wave of players.

Actual tournament action will kick off on Thursday at 8 a.m. and will continue both Thursday and Friday until 5 p.m. On Saturday and Sunday play will start at 7 a.m. and conclude at 4 p.m.

Playing in this year’s tournament are fan favorites such as Fred Couples, who was absent from last year’s tourney, John Daly fresh off a win this past weekend, Colin Montgomery, Kenny Perry, Miguel Angel Jimenez, also known as the most interesting man in golf, and Steve Stricker.

Stricker will be a popular follow behind the fun-loving John Daly and easy-going Fred Couples as he will serve as the 2017 Presidents Cup Captain later this year looking to lead some of the greatest golfers in the United States against the best golfers from across the country excluding Europe.

Another player in attendance will be defending champion Bernhard Langer, another fan favorite, after he took home the trophy with a dominating six-stroke victory in 2016.

Golf Channel will air live coverage of the event all four days of the tournament. Thursday and Friday action will be aired from 11:30 a.m. to 2:30 p.m., while Saturday and Sunday air times will be from 2-4 p.m. as the tournament concludes.

Tickets are still available at regionstradition.com/buy-tickets.php. A one day grounds ticket costs $20, a week-long pass costs $80 and a ticket to the Champions Club costs $350 per day. One of the fantastic things that the tour does is allow juniors 18 and under to attend tournaments for free as long as they are accompanied by an adult as they look to grow junior golf.

The Champions Club consists of an all-inclusive venue inside the Greystone Clubhouse with breakfast, lunch, snacks and an open bar. This will include a grounds ticket, but all patrons must have a ticket for this luxury, including juniors.

Coming in as favorites will be defending champion Langer who leads the Charls Schwab Cup Money List with $779,651 through seven events this year. Just behind him in second on the money list with $631,233 through six events is Couples.

Couples is tied for second with Langer and Jimenez for the most top 10 finishes this season on the tour with five top 10s in his six events played, which brings us to the top 10s leader in Kevin Southerland.

Southerland has yet to win a tournament this year, but has finished inside the top 10 in all seven of the events he has played in. He is due to break through and very well could do it in a big spot here.

My guess is Langer will be able to defend his championship after showing how low he could go on this course a year ago, but look out for others as Jimenez, Couples and Daly have all put wins on their 2017 resume so far and would love nothing more than to claim this esteemed trophy.

By ALEC ETHEREDGE | Sports Editor Pelham – Whether it be leading young men on the gridiron, putting others before... read more