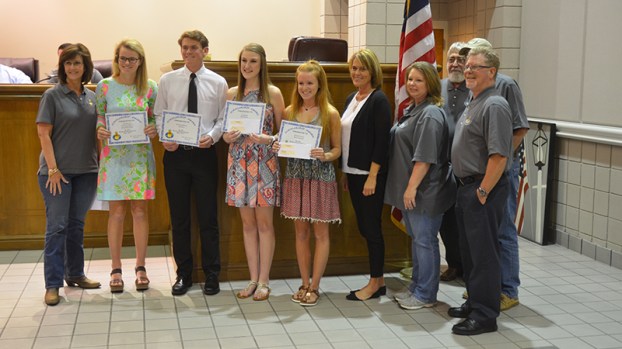 As the festival has grown, more funds have been available to distribute and since the opening of Helena High School in 2014, the committee has presented several scholarships to exemplary HHS seniors.

For the third year in a row, the Buck Creek Festival committee was able to present $500 scholarships to four HHS seniors at the May 8, Helena City Council meeting.

Seniors Cana Brown, Maggie Blanton, Brandon Beers and Madison Roussell were each presented with a $500 check to use for their college education and recognized by Buck Creek Festival Committee members and Helena City Council members.

Buck Creek Festival Committee member Cris Nelson said they received many worthy applications for the scholarship and it was “so hard to narrow it down.”

“Out of the proceeds from the festival every year, and I believe three years ago, the committee decided that we wanted to give back to the community in other ways,” Nelson said. “One of those ways was to try to reward some of the outstanding seniors in the city as they get ready to go to college with a small token to help them with the insurmountable cost of college. We have some phenomenal seniors getting ready to graduate and go to college and it was so hard to narrow it down.”

To be considered for the Buck Creek Scholarship, applicants had to be a graduating senior, resident of Helena, submit an application, two letters of recommendation and a one-page essay describing what the scholarship would mean to them.

Nelson read some of the high school accomplishments of each scholarship recipient and presented them with a check.