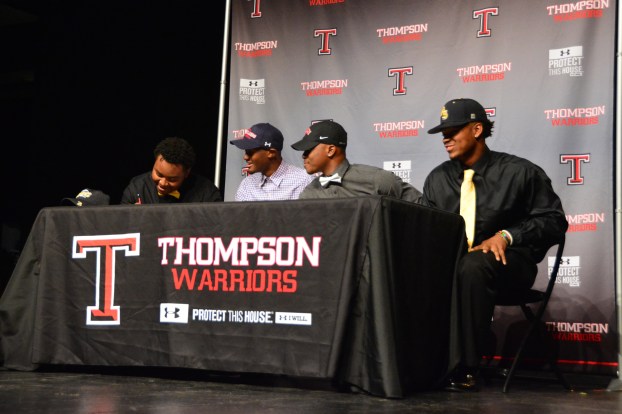 ALABASTER -Four Thompson High School seniors signed letters of intent for four different college sports teams at a ceremony in the THS auditorium on Friday, May 5.

“We’re very happy and proud of the four of them and this amazing accomplishment,” THS Principal Wesley Hester said. “They have been a model for all of us and I appreciate them for that. We celebrate them and thank them for the job they’ve done for the Thompson High School Warriors, and we wish them the very best going into the future.”

THS Football Coach Mark Freeman said he is proud to see how each of the students has grown since they began their athletic careers at THS.

“We’re watching them grow up and have a chance to further their education, which is the most important thing in their lives,” Freeman said. “We’re proud of them, and each one of them has a special place in our hearts.”

Senior Chris A. Lewis, also known as “Big Chris,” signed with the Alabama State University baseball team. He credited his coaches and his family for his accomplishments.

“I’d like to thank all of the coaches who have been a part of my life. They’ve helped me get to this moment,” Chris A. Lewis said. “I’d like to thank my mom the most, thank you for everything. To my brother, Marcus, somebody who believed in me more than anybody, I appreciate you.”

“I’d like to thank God for letting me get this far, and also my parents, for putting up with me for these last four years,” Chris L. Lewis said. “I wasn’t always a coachable player, but the coaches dealt with me anyway. And I want to thank all of y’all for coming out to this signing.”

Lastly, Corey Burroughs signed with the University of the Cumberland’s football team.

The signing ceremony was followed by a reception for the athletes’ families in the THS Media Center.

By ALEC ETHEREDGE | Sports Editor Now that the spring semester is coming to a close and 2017 graduates are... read more