Man charged with robbery while on probation

COLUMBIANA – A 46-year-old Alabaster man with a criminal history is being held in the Shelby County Jail on bonds totaling $31,000 after he was arrested and charged with robbing a man at knifepoint. 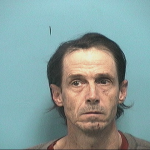 The Alabaster Police Department arrested Gregory Neil Wyatt, who lists an address on Old Highway 31, on May 7 and charged him with felony counts of first-degree robbery and fourth-degree theft of property.

According to his arrest warrants, Wyatt allegedly robbed an Alabaster victim at knifepoint on April 21 and stole less than $500 in cash from the victim.

First-degree robbery is a Class A felony, according to Alabama law, and carries a maximum of life in prison upon conviction.

When the alleged robbery took place, Wyatt was on probation for a first-degree theft of property charge he pleaded guilty to in 2014. In the theft of property case, Wyatt allegedly stole thousands of dollars in cash from another victim in February 2014.

Because he had three previous adult felony convictions on his record when he pleaded guilty to the previous first-degree theft of property charge, Wyatt was sentenced to 31 months in prison followed by three years of supervised probation.

His probation for the first-degree theft of property charge was revoked when he was arrested on May 7, according to court documents.

He is now set to appear in Shelby County District Court on June 8 for a preliminary hearing at 8:30 a.m.

Thomas the Tank heading to Heart of Dixie Railroad

By EMILY REED / Special to the Reporter CALERA – Thomas the Tank Engine will be rolling along to the Heart of... read more