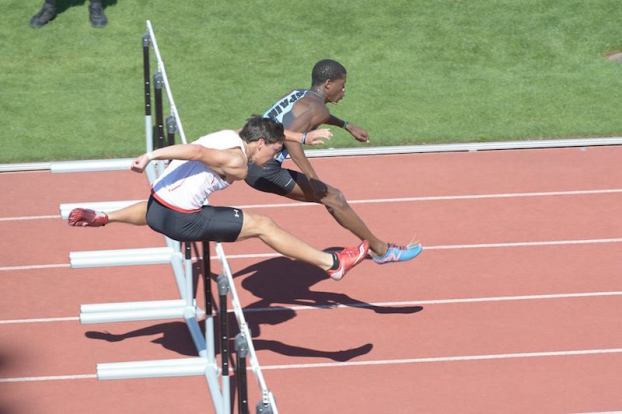 Spain Park's Christian Strong edges out Thompson's Craig Clark in the 110-meter hurdles. Strong went on to win the state championship in the event. (For the Reporter/Larry Dancy)

GULF SHORES – The boys and girls track and field state meet for Classes 4A-5A were held in Gulf Shores this past weekend and featured several strong showing from athletes in the county as well as two very strong team performances.

Briarwood’s boys and Pelham’s girls Shelby County when it came to the team aspect of the event as the Lions finished in sixth in the boys 5A standings and the Panthers became the county’s highest team finisher by taking fifth place in the girls 6A standings.

Below is a recap of all podium finishers in both the boys and girls track and field competitions.

Niya Oden just missed with fourth in triple jump with a distance of 35-07.50.

Senior Craig Clark took second in the 110-meter hurdles with a time of 14.74.

Payne also was able to pick up a state championship in 400-meter dash with a time of 56.58.

Strong and Thomas Jordan, both seniors, had a strong showing in the boys 110-meter hurdles for the Jags. Strong won the individual state championship with a time of 14.57, while Jordan finished on the podium in third with a time of 15.29.

Strong finished just short of claiming a second title in the 300-meter hurdles by finishing second with a time of 39.18, just .06 seconds behind first.

Damon Wright finished on the podium in the boys shot put finals taking third place with a measurement of 55-00.75.

Emorie Long also took home a second-place podium finish in the javelin finals with a measurement of 124-09.

The Panthers also had four other top five finishes leading them to finish as the county’s highest overall team finisher taking fifth in the 6A classification.

The girls 4X100 relay team took home a state championship with a time 49.69 finishing ahead of Beauregard and Demopolis.

That same team also took home first in the 4X400 relay with a time of 4:05.56 to finish ahead of Central-Tuscaloosa and Beauragard.

For the second year in a row Domingue brought home an individual state championship in the boys javelin finals with a measurement of 179-01.

Overall the Lions had five athletes finish inside the top five in respective events, which led to them finishing in sixth in the overall team standings.

From Staff Reports The 2017 Birmingham Girls All-Metro Team has been released and just like the strong season Shelby County... read more