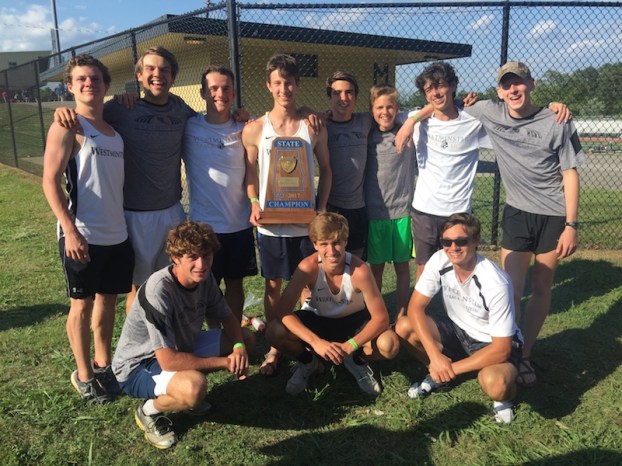 After two runner-up finishes in previous years, the Westminster boys track and field team was able to break through and win its first ever state championship on Saturday, May 6.

CULLMAN – In its six years as a school, the Westminster School at Oak Mountain’s track and field program has already created a dynasty, but was taken to the next level as the boys track and field team brought home its first ever state championship on Saturday, May 6.

In their nine years as a team, the Knights have always finished inside the top four including two runner-up finishes, but this year they finally busted through for that elusive championship.

It wasn’t just the boys making waves, but also the girls’ team as they finished in second just 33 points behind Whitesburg for a state championship of their own.

The Knights’ boys team was led by Nate Collins who brought home three individual state championships by himself.

Westminster had at least one finisher in the top five in 12 of the 18 finals events to show of its dominance of other opponents in the event. The best three events by far were the 800-meter run, the 1,600-meter run and the 3,200-meter run.

While Collins won all three individually, Hunter Wright, Campbell Lemons, Scott Landers, Pierce Moffett and John Porterfield all had strong showings in those events as well. In the 1,600-meter run, Wright finished fourth with a time of 4:52.47, while Porterfield finished one spot lower in fifth with a time of 4:56.60 to give the Knights three runners in the top five.

In the 800-meter run, Collins picked up the third of his three victories and had two teammates finish on the podium directly behind him. Landers, a senior, took home second with a time of 2:06.66 and Moffett, a junior, was one spot lower in third with a time of 2:06.85 as they swept first, second and third in the event.

Others with strong individual performances included Wiley Boone who finished fourth in the boys long jump, fifth in the 200-meter dash and 10th in the boys triple jump. Parker Mixon also had a nice showing in the boys javelin finals taking home a podium finish of third place with a distance of 154-02.

The Knights’ girls team had just seven events out of 18 where a runner finished outside the top 10 and in three of those seven they still had at least one runner finish inside the top five.

The only state championship for Westminster came in the 4X800-meter relay with a time of 10:09.10. Had they been able to win another relay race and a couple of more individual titles they would have claimed another state title, but the lack of individual champions kept them just short.

Junior Sarah Kate Lipperd tied for the highest finish for any Westminster girls runner in the 800-meter run with a time of 2:25.64. She also picked up a third place finish in the 300-meter hurdles with a time of 48.55.

Other podium finishes included 4X400-meter relay team and Katie Croushorn in the pole vault finals with a measurement of 8-06.

From Staff Reports The 2017 Birmingham Girls All-Metro Team has been released and just like the strong season Shelby County... read more