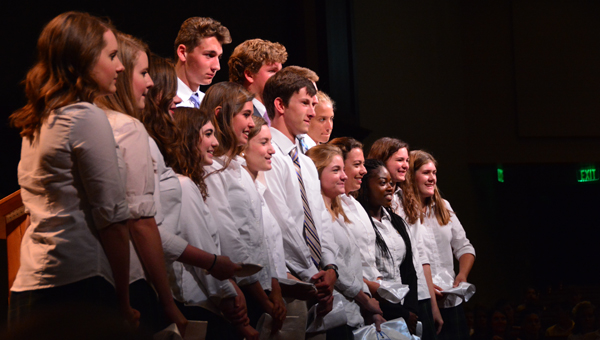 The seniors along with other students were recognized at Upper School Awards Day on Wednesday, May 3, at Oak Mountain Presbyterian Church.

Head of Upper School Chris Knowles said Awards Day is meant to “recognize God’s work in and through our students” and noted that not all achievements can be recognized.

“We who work at the school see incredible things being done each and every day,” Knowles said.

The first awards handed out were for Latin, and then the Thesis Awards were presented.

Juniors and seniors choose topics for their theses, research and then present in the form of a paper and a speech in front of their peers.

Westminster College Advisor and Dean of Students Bridges Herring talked about the criteria for being selected for National Honor Society before recognizing inductees.

Knowles announced that the class valedictorian is Maddie Hoaglund, and the salutatorian is Sarah McDaniel.

The class has eight students with an unweighted 4.0 GPA.

Senior letter winners were presented with Westminster blankets, and two seniors participated in signing ceremonies to declare their intentions to participate in sports at the collegiate level.

Hoaglund will compete in track and field at Washington and Lee University, and Josh Lipperd will play soccer at Covenant College.

Finally, Dean of Students Ben Burgess announced the winner of the year-long house competition: House Tolkien, which also won the Shakespeare Festival that concludes the competition.

Each year, Westminster Upper School students are divided into four houses, which compete against each other in various activities, ranging from Ultimate Frisbee to poetry.