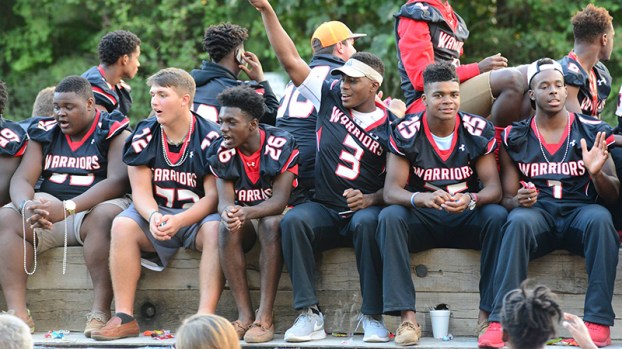 Thompson High School football players don their athletic attire as they take part in the 2016 Alabaster homecoming parade. Dress code changes for the upcoming school year will allow students to wear their athletic gear to school, as long as it meets other dress code guidelines. (Reporter Photo/Neal Wagner)

ALABASTER –The Alabaster City School System will make a significant change to its dress code policies next year, after gathering feedback from school leaders and members of the Superintendent’s Advisory Committee.

“Previously, students were not allowed to wear athletic pants or shorts, even if it was Thompson athletic wear,” Tanner said.

As a result of the new dress code policy, students at the city’s schools will be able to wear athletic wear such as sweatpants and warmup gear, provided those articles of clothing meet all other dress code guidelines. Leggings will also be allowed beginning with the next school year, as long as appropriate outer garments are also worn, Tanner said.

“As long as they are not too short, too baggy or too tight, the kids can wear them. The athletic wear has to meet the rest of the dress code,” Tanner said.

The changes came about as a result of feedback from school administrators and students on the Superintendent’s Advisory Committee, which regularly meets with Superintendent Dr. Wayne Vickers and other ACS leaders to share their feedback on the system.

“The students had some great arguments. They said ‘We spent $600 on (athletic team) spirit packs, and we can’t event wear it to school,’” Tanner said, noting many student athletes get to campus for early morning workouts, but were not allowed to wear their team gear once the school day began. “Why not? We want them to promote Thompson athletics.”

“It’s hard to tell a kid they’re out of dress code if they’re dressed head to toe in Thompson gear,” THS Principal Dr. Wesley Hester added. “For our student athletes who have spirit pack gear, they are unable to wear it because of the current dress code constraints.”

“If they are appropriately dressed and ready to learn, why waste instructional time worrying about dress code? We’ve got bigger things to worry about, and it was consuming a lot of our administrators’ time,” Tanner said. “We’ve told the students, ‘We are going to try this, and we need to you be leaders in the school and tell your friends not to take advantage of it.’”

COLUMBIANA- The families of Elvin Hill Elementary School students got a glimpse of what their kids are learning at the... read more