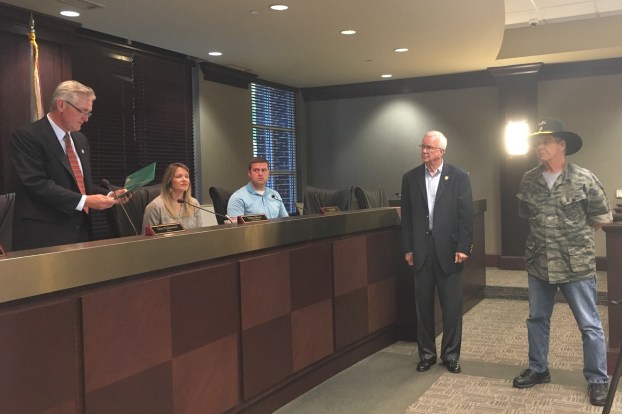 CHELSEA –Chelsea resident Skip Brown was recently honored by the city after he received his Bronze Star Medal for his service during the Vietnam War in January.

“He’s a Chelsea guy, and he’s a hero in my mind,” Mayor Tony Picklesimer said. “I wanted to appropriately commend him and recognize him.”

Brown said he became eligible for the Bronze Star Medal after he was wounded during an ambush in 1972.

“We volunteered for an ambush recon mission the night before we were supposed to go home,” Brown said. “We were up against a lot of Vietcong, and there were only eight of us. Five of us were wounded, and one of us was killed. It was a costly night.”

While Brown’s unit returned home less than 24 hours after the ambush, Brown was kept in a Vietnam hospital. According to Picklesimer, the paperwork to recognize him “was lost in the shuffle.” Brown said he was not aware that he qualified for any award until five years ago.

“They all went one way, and I went in another. I never even questioned it. I had no idea I was in line for any sort of award. I was just doing my job,” Brown said.

After his commander, Col. Bill Stokes discovered that Brown qualified for the award, he notified Brown and teamed up with then-Senator Jeff Sessions to ensure that Brown received it.

While many people today honor veterans, Brown said he remembers a time when Vietnam veterans were poorly treated after they arrived back home. To him, receiving the Bronze Star Medal serves as late-term recognition and is helping him find closure.

“When you see veterans in uniform at the airport, people will clap and cheer for them. When we would come home, people would throw things at us. We went into the john and our uniforms went into the trash. We would change into civilian clothes and go on our way,” Brown said. “This is after a 49-year wait. I’m still grappling with it. There’s some pride, but I keep going back to 1972 when it wasn’t exactly cool to be a Vietnam vet. To get the award sort of closes the door on Vietnam for me.”

Before Brown moved to Chelsea, Picklesimer said he served as an officer with the Delray Beach Police Department and played an instrumental role in the formation of Chelsea’s Citizens Observer Patrol.

“He was the liaison between their COP program and us. When he got here, he volunteered to mentor our COP program,” Picklesimer said.

While he is proud to have been recognized, Brown said he is prouder of all of those who lost their lives during the war.

“There are a million other stories out there. People throw the word ‘hero’ around,” Brown said. “My heroes are the 58,478 names on that black wall [at the Vietnam Veterans Memorial] in Washington D.C. I live for them every day.”