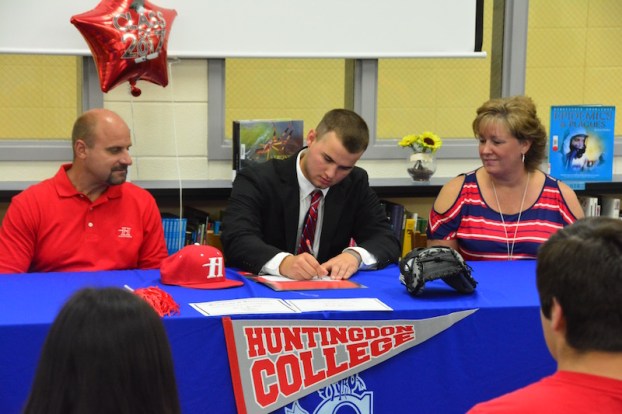 CHELSEA – A historic season for the Chelsea Hornets came to an end on Saturday, May 6, when they fell to defending 6A state champions Hillcrest-Tuscaloosa in the quarterfinals of the 2017 6A playoffs.

While Chelsea’s season came to an end short of their ultimate goal, it didn’t end without a historic run. After picking up just 12 wins in 2016, the Hornets responded with 15 more than that this spring setting a school record with 27 wins, something a small senior class of four players has to hold onto for the rest of their lives.

One of those esteemed seniors and leaders on this 2017 squad was none other than Jacob Burback, who signed a college scholarship with Huntingdon College on Tuesday, May 9, as he looks to continue his baseball and academic career at the next level.

“It’s not the end of a journey, this is just milestone in the middle,” Burback said of the special day. “It basically cements all of the hard work I have done in high school even though there is plenty of more work to do.”

Burback was one of the key components of a Hornets team that made a turnaround very few expected outside of the Chelsea locker room. He hit .393 from the plate including an on base percentage of .500 and a slugging percentage of .475. He also drove in a total of 37 RBIs on 48 hits this season, 38 singles and 10 doubles.

“Going from last year’s squad where we struggled to this year’s squad having the best team of all time was nice, it was just important to us seniors that we left the team on a high note,” Burback said.

In his time with the Hornets, Burback said he has learned many lessons, but there is one thing that sticks out that will continue to help him along his journey.

“You’re going to hit a lot of bumps in the road,” he said. “But it’s just important to keep going and make it through.”

It wasn’t just the credit of Burback and the seniors that helped this team turnaround, but also the coaching and mentoring of head coach Michael Stallings.

“He definitely has had an impact on me,” Burback said of his head coach. “The most PG way to put it is he taught me to not be a baby and to get the courage to throw a baseball and play tougher.”

Stallings had several kind words for his catcher, but couldn’t help praise his parents and the part they played in handing Stallings such a great player on the field.

“So many people have had an impact on his journey, but none has been greater than that of his parents,” Stallings said. “He definitely would not be here to do without great parental support and a great upbringing. From a coach’s perspective, I want to thank them for the role they’ve had in bringing him to this point.” 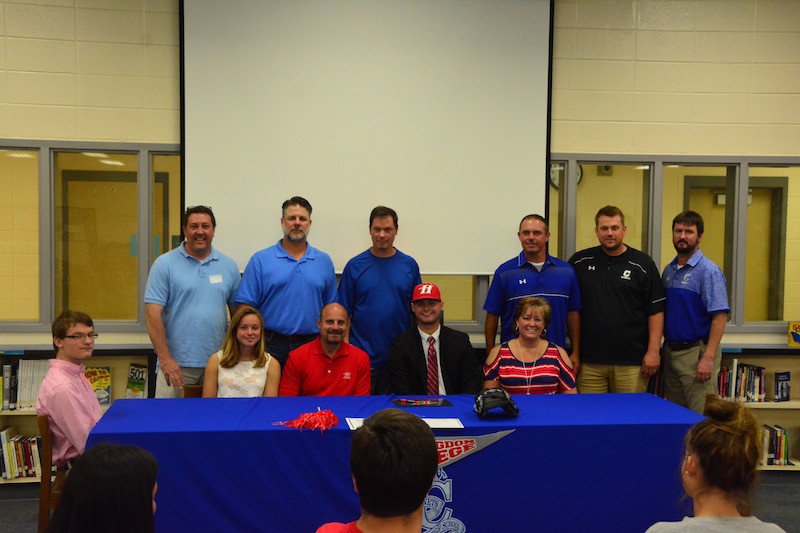 Burback surrounded by his family and coaches after singing. (Reporter photo/Alec Etheredge)

The memories created during the 2017 season are some that will last a lifetime for not only these seniors and Burback, but for Stallings as well.

Now, it’s time for a new chapter for Burback as he trades in his Hornet blue and white for the red and white at Huntingdon College as he prepares to take the leap to the next level.

“I’m just excited I get to keep playing baseball, that’s all that matters to me,” he said.