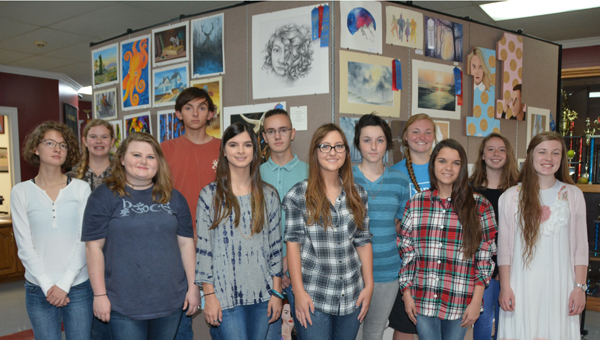 The art show circuit begins with a school competition. Entrants are split into two divisions: seventh through ninth grade and 10th through 12th grade.

The first- and second-place winners in the school art show advance to the district show, which this year was held April 19 at Edgewood Academy in Elmore.

In each division, there are sub-categories organized by medium, such as waterbase media, color drawing and acrylic painting.

First-place pieces from the district art show advanced to the state art show on April 28 at Faulkner University.

Bram Horne earned three ribbons at the state show in the 7-9 grade division, including first place in water base media for Wolf Hunt, second place in color drawing for Kestrel and first place and overall Best of Show for the Rabbit acrylic painting.

“I didn’t think it would turn out quite that well,” Horne said of the three-month project.

FROM STAFF REPORTS Four local students are among the most recent announced recipients of National Merit Scholarships. Margaret Baldwin and... read more