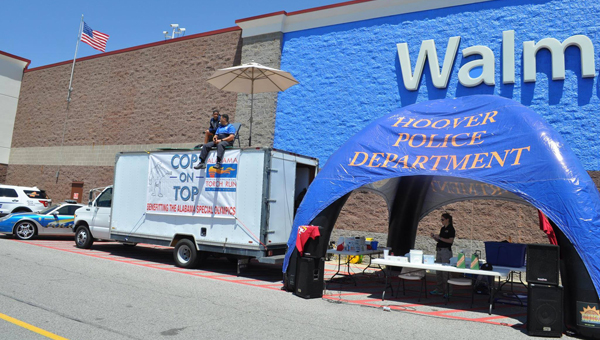 “Cops on Top” was held May 5-6, lasting about 12 hours each day, at the store to benefit Special Olympics of Alabama.

The effort raised $7,300 for Special Olympics athletes with a total of eight deputies and officers helping out, HPD Officer Brian Hale said.

Some officers were stationed at the entrances assisting the athletes while they greeted people and collected donations.

“It’s hard for people to say no to our athletes,” Hale said. “They do a wonderful job collecting donations and interacting with the public.”

Other officers were on top of a box truck with a public address system welcoming customers as they walked into the store, along with music and a festive atmosphere.

“We also helped customers load up their vehicles with all of the groceries they just purchased from Walmart,” Hale said. “It’s a great time to have a quick conversation and explain to people why we are out there.”

Donors could drop cash or coins into buckets carried by the athletes, or visit the HPD tent, where $20 could purchase a Special Olympics T-shirt and a box of doughnuts.

“Some would drive by on their way in or out of the parking lot and roll down their windows to give some money to the athletes,” Hale said. “Some would write checks, others gave a few dollars—every cent is appreciated.

“All of the money collected at these fundraisers stays in Alabama for our Alabama athletes. The funds collected go toward sending athletes to national and international competitions. The more money we raise, the more people we can send.”

“Through the years, there have been different locations and different fundraising names, but the primary goal has always remained the same: Let’s come together with our community and raise awareness as well as funding for these very gifted Special Olympics athletes,” Hale said.

SCSO, HPD and the Law Enforcement Torch Run to benefit Special Olympics of Alabama thanked those who volunteered and gave contributions.

Fundraisers benefitting Special Olympics are held across the state and sponsored by a variety of law enforcement agencies.