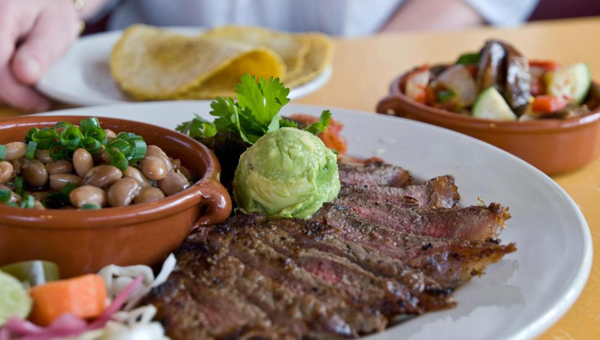 The dishes served at Little Donkey are described as Southern-inspired Mexican. (CONTRIBUTED)

Little Donkey to open location on Highway 280 this summer

HOOVER – Little Donkey, a Southern-inspired Mexican restaurant that first opened in Homewood in 2012, will expand to Shelby County with a second location this summer.

“We take Mexican flavors and Mexican dishes, and we cook them with a Southern palette and Southern style,” restaurant chef and partner with Fresh Hospitality Group Joshua Gentry said. “I think about the food from my Southern perspective and apply that to Mexican food. When I think about a tamale, for example, they are made with ground masa, which is ground corn. That is also the basis of cornbread and grits, which we in the South eat all day.”

While Gentry said there is no official opening date for the forthcoming U.S. 280 location, he anticipates the restaurant could be open by early July.

Part of the motivation to open a second location was the growth along U.S. 280, Gentry said.

“We feel like there are a ton of people that live in that part of town,” Gentry said. “They want more in terms of more options, and when we look around, we see those people asking for more.”

The newest location will be at the former Verizon store near Alabama 119, in the shopping center with Big Bad Breakfast.

The restaurant’s menu features made-from-scratch tacos, quesadillas, tamales, burritos and tacos, as well as a popular dish of fried chicken.

Another customer favorite is the featured dessert of churros, a fried pastry rolled in cinnamon and sugar with chocolate dipping sauce.

There is also a full bar at the restaurant.

Fans of the Homewood location can expect to see little change at the U.S. 280 restaurant.

“My goal is for absolutely nothing to be different,” Gentry said. “The hope is that the same things that happen in one store happen in the other. That is the point of it all.”

The only change with the new location will be size, as it will be about 30 seats smaller than the Homewood location.

The restaurant will employ about 40-50 people.

For more information about the official opening date, or about the restaurant, visit TheLittleDonkey.com.