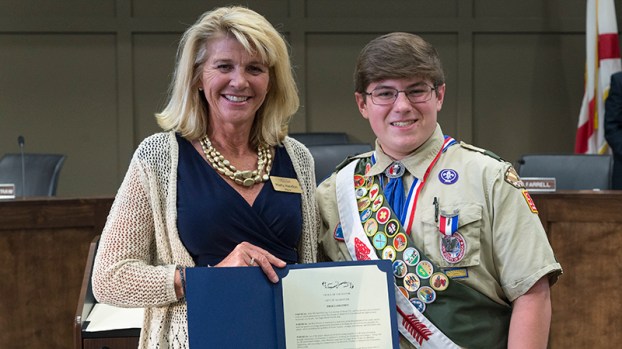 ALABASTER – A local Boy Scout’s efforts to beautify the Meadow View Elementary School campus and serve his community through his Eagle Scout project earned him praise from the Alabaster mayor during a recent meeting.

Alabaster Mayor Marty Handlon presented a proclamation during a May 8 City Council meeting honoring John Michael McCrory, who is a member of the Helena-based Boy Scout Troop 532 and recently earned his Eagle Scout Award. McCrory also led the Pledge of Allegiance to start the meeting.

“John Michael McCrory … has not only proven himself to be an outstanding member of the Boy Scouts of America, but has attained the highest honor bestowed on a Scout – the Eagle Scout Award,” Handlon said during her presentation.

McCrory marches in the Thompson High School Marching Southern Sounds band and is a member of the Briarwood Presbyterian Church youth group.

“The Eagle Scout Award distinction will follow John Michael throughout life, and will be a beacon to others of his leadership quality and commitment,” Handlon said. “I recognize John for this highest honor earned, and encourage him to continue his commitment to excellence.”

COLUMBIANA ­-The Shelby County Drug Enforcement Task Force arrested a Birmingham on Thursday, May 4, after they received a community... read more