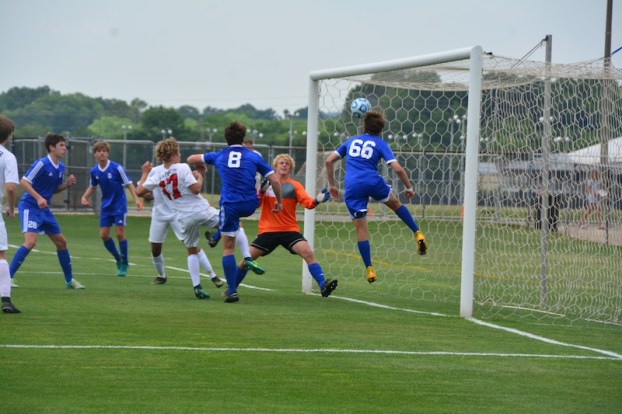 Sam Simpson puts a ball in the back of the net within three minutes of the game starting to give Indian Springs a quick 1-0 advantage. Reporter photo/Alec Etheredge

HUNTSVILLE – It took all of three minutes into Indian Springs’ semifinal game with Bayside High School to be able to tell what kind of day it was going to be for the team as they looked to cement their spot in the 2017 1A-3A boys state championship game on Thursday, May 11.

With just 2:41 off the clock in the first half, Springs received a free kick from just to the right of the penalty box after starting the game with some up tempo aggressive play. The kick eventually found its way to senior Sam Simpson after being bobbled around on a few feet. Simpson stuck his foot out and was able to loft the ball into the net past the Bayside keeper Jack Smith to put Indian Springs up 1-0.

That aggressiveness was key to them scoring that first goal as well as the two more they scored the remainder of the way. Despite a push from Bayside early in the second half to tie the game, Springs was able to answer with two unanswered goals over the last 23:52 of the game to pull away and seal a spot in the championship game.

“They did something I haven’t seen in years by play a 4-2-4 to try and press our backs,” Springs head coach Rik Tozzi said. “It really turned it into an ugly game, but I told the team in the locker room what we had to do and we made the best adjustment we could.”

After Indian Springs scored in the first three minutes of the half, the remainder of the first half was somewhat quiet. Springs had several more opportunities, but couldn’t capitalize while Bayside didn’t get a good look until there was 10:22 left in the half. This all led to Indian Springs taking a 1-0 lead into the break.

Coming out of the halftime break, however, Bayside switched into a new gear and was able to create some momentum early in the half. Dawson Jellenc was able to get a ball off a corner for the Admirals and put it in the back of the net to tie the game 1-1 less than three minutes into the second half.

“Anytime a team comes out and scores on you in the first couple of minutes like that you feel like that’s on you as the coach, I just got out coached at halftime, but thankfully my players had enough character to withstand that,” Tozzi said.

And withstand it they did. After a slow next 14 minutes, Springs junior Justin Chapman woke up after a struggling start to the day. The first of his big plays came with 24 minutes to play in the half as he broke free up the middle of the field.

Chapman eventually got tripped up inside the penalty box with no other choice for Bayside leading to a penalty kick. Patrick McGuire took the PK and fired it into the left side of the net with ease to give Indian Springs a 2-1 avantage with 23:52 remaining.

They held this lead for a while with neither team threatening much until 21 minutes later when Chapman broke free up the middle again. This time he crossed up the only defender in his path and proceeded to cross up the goalkeeper as both fell to the grass. Chapman was left with a wide open net and easily slid the ball in to give his team a 3-1 lead, which they held over the final 2:55 to win the game.

“I moved him up front hoping his physical skills and aggression would help us and fortunately it did,” Tozzi said. “He broke away to create one and scored the second so he was responsible for both winning goals.”

Indian Springs will play in the 1A/3A championship game tomorrow at 5 p.m. as they look for their second state title in the last four years.

By ALEC ETHEREDGE | Sports Editor HUNTSVILLE – If it sounds like a broken record, that’s because it is. Sarah... read more