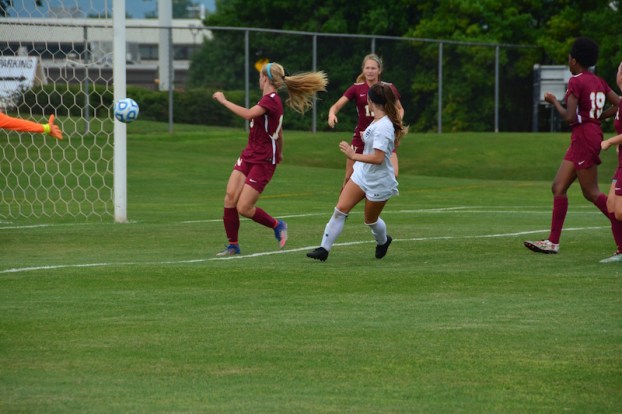 Chelsea’s Haley Greene fires her first goal into the right side of the net with 2:02 before the half. It was the first of her three as she went on to grab a hat trick to lead the Hornets to the state championship game tomorrow. (Reporter photo/Alec Etheredge)

HUNTSVILLE – There’s really just one simple word to describe Chelsea’s semifinal matchup with Northview High School, dominant. The Hornets’ girls came into the game on Friday, May 12, with a load of confidence after knocking off two of the state’s top programs in John Carroll and Homewood in their last three games and the confidence clearly showed in a 5-0 win over the Cougars to advance to the state championship game tomorrow.

The strong offensive performance was in large part due to Haley Greene, who flashed some fancy moves and a powerful left leg on her way to a semifinal hat trick.

But it wasn’t until the 13th and final shot of the half with 2:02 remaining, that the Hornets were able to take advantage of their domination as Greene caught a pass just outside the box and split between two defenders to get herself wide open right in front of the goal. She gathered the ball with her left foot and fired it into the right side of the net just out of the keepers reach to give her team a 1-0 advantage at the half.

Coming out of the locker room, just like the first half, the Hornets put two shots on goal within the first two minutes of the second half starting.

A few minutes later, Greene found the ball in her possession again and powered her way through a defender and was able to kick the ball right as the goalkeeper is falling on it causing the ball to tumble across the goal line into the net to give the Hornets a 2-0 lead 6:27 into the half.

After two extremely good looks inside the box over a short two-miute span, Claire Guillen added Chelsea’s third goal with 24:46 to give the Hornets a 3-0 lead and some insurance.

With 19:07 remaining in the game, the Hornets got a little flashy with their footwork as Lexie Duca was able to slide a gorgeous pass through two defenders to Greene who fired in her hat trick goal to give the Hornets a 4-0 lead.

With the game already out of reach, Mary Connor Smith added a fifth goal to really seal the deal with 9:45 left as she was able to fire a ball right at the goalkeeper that rolled right out of her hands and in between her legs to put Chelsea up by the final score of 5-0.

The Hornets now advance to take on Southside-Gadsden in the state championship game tomorrow at 10 a.m.