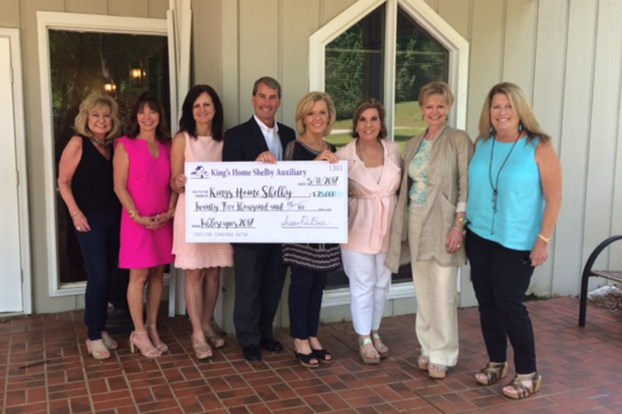 CHELSEA -The King’s Home Shelby Auxiliary held an ongoing fundraiser titled “TableScapes” on Apr. 19 at Metro Church of God. 30 participants decorated tables and raised over $30,000 dollars to support the women and children of domestic violence. Guests were invited by the committee and participants to sit and vote on the best decorated table. Tickets were sold at the fundraiser for $40 dollars each and a silent auction on items followed after. Volunteer waiters were also tipped at the tables. All of the money raised from the fundraiser was from those sales and activities. The theme for the fundraiser was “Celebrating God’s Faithfulness”; and the former first lady of the state, Patsy Riley, was the guest speaker.

On Thursday, May 11, a check of $25,000 dollars was presented to the executive director of King’s Home, Lew Burdette. Those proceeds went to help with the electrical bill at the shelter. The president of King’s Home, Pam Bradford was also in attendance, as well as the auxiliary’s board of directors-made up of the executive and standing committees.

King’s Home Shelby Auxiliary has been around serving the central Alabama area for decades. It was formerly known as King’s Ranch at Hannah Home and will celebrate its 45th anniversary next year. Burdette briefly details the auxiliary he passionately supervises.

“King’s Home is the overall ministry that supports teenagers. We have twelve homes for teenagers 98% of them experience horrible abuse; and then ten homes for adult moms with children fleeing from domestic violence.” He also explains the board of directors’ efforts to raise money, organize food and clothing drives, and other services to support King’s Home,” Burdette said. “They wanted to formally organize themselves because they’re an active group and they raise money almost year-round. Not only do they raise money for us but they also provide so many services to the home. They’ll have a linen drive or if we need paper goods or cleaning supplies- or any special events like birthday parties, Thanksgiving, and Christmas. They do everything to support the homes for the moms and children there.”

The women and children of King’s Home reside there at no cost and are given another opportunity at life. Some attend college debt free and earn successful careers. Burdette‘s 14 years of service are truly treasured at King’s Home and he loves every single moment of the program. His goal for every woman and child or teenager at the King’s Home is to “dream big.”