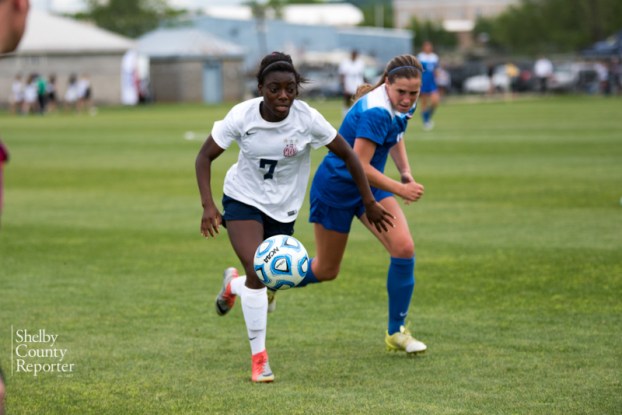 Nicole Payne will be one of the three leading scorers and offensive playmakers back on next year's squad. (Reporter photo/Keith McCoy)

HUNTSVILLE – Déjà vu ensued on Friday, May 12 as the Oak Mountain Eagles and Vestavia Hills Rebels met on the pitch for the second time this season, but this time with much more on the line as the two were looking for a spot in the 7A state championship game.

Although, the game was dominated mostly by Vestavia the final 25 minutes featured a lot of action and fireworks when it came to officials and Oak Mountain head coach Chris Blight.

The first half was all Vestavia and it only took four minutes for their strong play to show up.  After a back-and-forth first 3:30 of the game, Caroline Silvio put the Rebels first goal of the game in the board less than three minutes into the contest as they took a quick 1-0 lead.

After more back-and-forth play, Julia Pack finally gave Oak Mountain its first good look of the game when she snuck into the box at the 21-minute mark, but Vestavia’s goalkeeper made a great save to keep the Rebles in front 1-0.

It didn’t take long for Vestavia to take advantage as they pushed the ball up the left side of the field with extreme pace before the ball found Taylor Korn’s foot and from 20 yards out, Korn was able to fire a shot toward a wide open goal that found the right side of the net for a 2-0 lead.

While that lead held for the remainder of the game, things got very dicey in the second half. With 20 minutes remaining in the game, Pack was able to get into the goalie box for the second time in the game. Right as she was planting to shoot, she was tripped up from below and got a slight push on the upper half of her body that sent her to the ground.

The officials didn’t blow a whistle which caused Oak Mountain head coach Chris Blight to lose his mind on the sideline asking for a whistle and an explanation. He eventually got a yellow card, but not explanation in what appeared to be a clear foul.

A whistle would have set up a penalty kick for the Eagles and given them an incredible shot at cutting into the 2-0 lead.

Fast forward a few minutes to the 11-minute mark and Nicole Payne broke away up the middle of the field. She had the last defender beat before being tripped up, which received a yellow card and a free kick right on the penalty box line. Blight again was frustrated, as the clear penalty was called, but as the last defender drawing a penalty, it should have been a red card.

The explanation to coach Blight was that the goalkeeper was the last defender in the situation which was clearly incorrect and frustrated him even more.

While the officiating was very questionable and could have been a big reason for their loss, the Eagles missed three free kicks within 25 yards in the last 15 minutes of the game and let several other opportunities go array throughout.

Either way you look at it, this year’s Oak Mountain team, that was looking for its first title since 2015, will go up there as one of the greats and will return a big bulk of their offense next year as they look for redemption.

The seniors should hold their heads high as they helped lead this team to an overall record of 20-3-2 and were part of one of the strongest classes in the school’s history. There may have been some missed calls and some hostility toward the officials, but this team and their coach fought until the very end.

Third time is the charm: Pelham advances to state championship

By ALEC ETHEREDGE | Sports Editor HUNTSVILLE – One loan goal is all it took for Pelham to grab a... read more