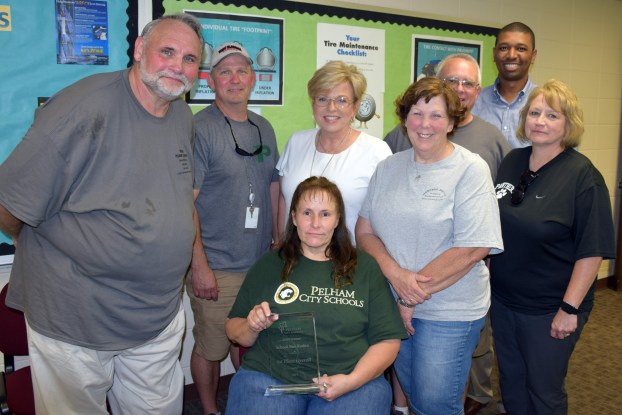 MONTEVALLO – Some Pelham and Hoover city schools bus drivers took an opportunity to sharpen their skills during Pelham City Schools’ third School Bus Rodeo on Friday, May 12, at the Alabama Traffic & Safety Center at the University of Montevallo.

During the event, bus drivers participate in an obstacle course that tests their bus driving skills, PCS transportation supervisor TJ Dunaway said. The drivers also have to inspect a bus and point out as many safety errors as possible.

Nine PCS and three Hoover City Schools bus drivers participated in the event. Each bus driver was scored on how well they performed and first through fifth place winners were named during a luncheon/awards ceremony.

“It’s a training exercise for them,” Dunaway said. “It’s to test their skills and once they complete theses courses, I think it makes them a safer driver. It also gives them an opportunity to socialize with fellow bus drivers.”

“It’s just to sharpen their skills,” Dunaway said. “It doesn’t affect their job if they don’t do well. It’s just fellowship and fun.”

“I love it,” he said. “We have a good time, but the most important thing is that it helps you with your skills.”

Lee said the course is more difficult than what he normally encounters on the road.

“It makes you better – it really does,” he said. “I practice a little bit by setting up a course with just the harder ones so we can practice for it because we want to do good. I want to do good. Whether you dig ditches or build airplanes, you have to try to be the best you can at what you do.”

PCS Superintendent Dr. Scott Coefield said he appreciates the bus drivers taking the time to participate in the bus rodeo.

“Bus driving is a skill and anytime you possess a skill you want an opportunity to showcase those skills and it’s fun for them,” Coefield. “I always like to come out and watch a little bit of it.”